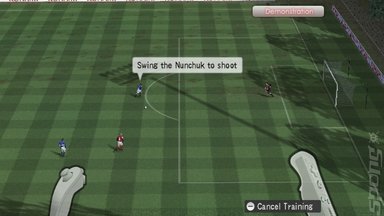 All Images (12) »
Konami has let fly the details of just how the Wii version of Pro Evolution Soccer 2008 will differ from its siblings. To illustrate, SPOnG's also got a fresh batch of screens to tantalise you.

The announcement promises that the release will be "A football game like no other". How? Well, it has an "innovative user interface", of course! First up, we've got details of how positioning is controlled: "The Nunchuck is used to move the current player, while the Wii Remote is used to pick out players to send them on runs or to receive passes via simple click and drag system which uses arrows to show the path of the run, and a press of the ?B? button to complete the move".

If you can't pat your head and rub your stomach simultaneously, you might struggle with that one...

So, what of dribbling? Konami tells us, "Dribbling is effected by clicking on the player and using an arrow and the 'A' button to guide the ball. The speed of the run can then be altered by extending or reducing the length of the guiding arrow, allowing stunning quick turns and bursts of speed to catch defenders off-guard".

But what about when you want to put the ball in the back of the net? Konami's got you covered, "Shooting also benefits from more control over the players, with the Nunchuck used to shoot or head simply by shaking it". Ah, shaking. That innovative old chestnut - if there can be such a thing. "As with the real sport, however, timing is everything in front of goal, and the speed of the pass or cross, the ability of the player, the angle of trajectory and the timing of the shot or header will all have differing effects on the resultant shot", Konami goes on.

PES 2008 will be the first Konami release to make use of Miis. Remember those? You created one when you first played Wii Sport and Wii Play and you haven't really seen the blighter since... Well, in PES 2008 up to 16 Miis can be put into a team, which can then be stored on a Wii Remote and switched across to another, if you so choose.

The game will also make use of the Wii's online functionality for multi-player matches either against random opponents or your mates. Additionally, team data can be sent between consoles using WiiConnect24.

While Konami claims to be offering "a football game like no other", it's not the first publisher to take a bit of time to make use of the Wii's unique functionality for a footy game. Back in June last year, Electronic Arts announced its 'Footii Party' features for the Wii version of FIFA '08.

So, will the new PES control system for the Wii be any good? Andy SPOnG isn't convinced. "From them diagrams, I dun't reckon it's going to be much good", he grumbled. It should be remembered, however, that Andy supports Huddersfield Town and isn't used to good football. Check out the diagrams yourself and let us know what you think in the Forum.
Companies: Konami
Games: Pro Evolution Soccer 2008

Rutabaga 6 Feb 2008 16:52
2/6
... And you control the Goalkeeper by standing on the WiiFit board on one leg whilst spinning a plate with your nob.
more comments below our sponsor's message

Tim Smith 6 Feb 2008 17:27
3/6
Rutabaga wrote:
... And you control the Goalkeeper by standing on the WiiFit board on one leg whilst spinning a plate with your nob.

Now come on, be fair, you only control the keeper that way if he's Paul Robinson.

ozfunghi 6 Feb 2008 20:11
4/6
We only managed to squeeze in a handful of games but at the end of our short acquaintance we were already getting a feel for the new style, dictating play with the Wii-mote and Nunchuk with all the ferocity of Graham Taylor in his more unstable years. What really excites is what is capable when the controls are fully grasped ? with such untold control in your hands a whole different skill set is required, and after the relative disappointment of the Xbox 360 and PS3 incarnations, Pro Evolution 2008 on the Wii looks to be the first truly next-generation offering from the series.

Joji 7 Feb 2008 02:37
5/6
Good to see them including Pro Evo on Wii, as we never got the GC version japan got. Controls do sound confusing but knowing Konami its probably well done.

This Wii version could be magic if they got the controls right. A totally new football experience.
But if they get it wrong it could be horribly broken at worst or a football game that plays itself at best.