The Charts: Did EA Burnout? 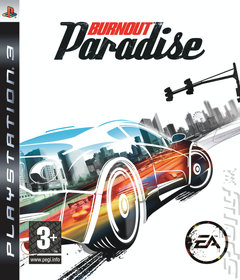 Electronic Arts becomes the first publisher of 2008 to hold on to a Number 1 for two weeks running in the All Formats Chart this week. Yup, Burnout Paradise has held its position at Number 1.

The PS3 almost manages to overtake the Xbox 360 version in terms of sales share of the game, accounting for 49% of units shifted. That doesn't mean its sales climb, however. It sees a 9% decline in sales, compared to a 16% decline for the 360 version.

Wii Play is given a boost thanks to renewed hardware stock, climbing from Number 4 to Number 2. Activision's Call of Duty 4, meanwhile, hangs in at Number 3, marking its eighth week in the Top 3. It's another Wii exclusive at Number 4, with Mario & Sonic at the Olympic Games perching there after sitting at Number 2 last week and seeing a 46% sales drop.

The DS only has two representatives in the Top 10 this week. Care to take a guess at what they are? If you've even accidentally seen the Charts out of the corner of your eye in the last few months you almost certainly got that right. Brain Training is a non-mover at Number 5, while its sequel is up from Number 10 to Number 7.

A spot of hardware bundling enables a re-entry into the Top 40 for both Sonic and the Secret Rings and Mario Strikers Charged Football for the Wii. They hit Numbers 22 and 28 respectively.

The only new release to hit the Top 40 this week is Kingdom Under Fire: Circle of Doom from Microsoft, which débuts at Number 33.

Next week, keep an eye out for Capcom's Devil May Cry 4, Square's Final Fantasy and its sequel getting a PSP release, Disney's Turok and Conflict: Denied Ops from Eidos.

Below you'll find the glorious Top 10 in all its glory.

For the Top 40 All Format Chart plus platform breakdowns and more, head over to SPOnG's dedicated Charts Page.

I am sure Microsoft published this game they did not make it.

Also the game is absolutly crap beyond belief.

DMC4 is gonna hit no.1 I hope that game is stunning!

config 5 Feb 2008 13:48
2/3
Disney didn't make Turok, Activision didn't make COD4 and Eidos didn't make Conflict. They're all publishers. Does stop the games being "from" those companies.

Burnout Paradise is a worthy number one. I was dubious at first but I am hooked now. The EyeToy features are strangely fun (when people bother with them, and I don't blame them for not because it freaked me out the first time I saw my "owned" face); the free-roaming nature of the game actually works quite well when you get used to it; the events are fun once you get used to the roads; and the seamless online play is SO good after the nightmares of the Call of Duty 4 crap server & lobby issues. The only thing I miss is the B3-style "takedown" where you could steer through the air to take out multiple vehicles (which, I thought, they broke after that one in the less-good Burnout: Revenge").

As for next week's chart, anyone buying Turok or Conflict who does not have Call of Duty 4 would be mental- they are total arse next to the beautiful behemoth that is CoD4. And SuperSaiyan, I'd steer clear of Devil May Cry 4. It is a hard game, for real men and real gamers, and it will just make you sob fanbaby tears into your wank-stained fists.