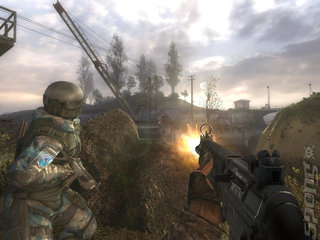 The deal marks the conclusion of a publishing deal between the two companies. Previously, Koch has published GSC's Heroes of Annihilated Empires.

The game is a prequel to last year's S.T.A.L.K.E.R: Shadow of Chernobyl, a look into the future and what happens when you get careless when playing around with nuclear power, which was published by THQ.

We'll let Koch tell you about it: "The game is set in 2011 and brings forth the events to have preceded the third campaign of Strelok to the Zone center. S.T.A.L.K.E.R.: Clear Sky introduces an alternative look onto the events of the original game and offers the player to try himself out as a mercenary s.t.a.l.k.e.r. in search of his own path in the world of S.T.A.L.K.E.R."

"The unique atmosphere of S.T.A.L.K.E.R. caused a sensation among gamers, while the sales have demonstrated the brand's enormous potential. We are delighted with this chance to publish the prequel together with GSC under the Deep Silver label", uttered Craig McNicol, Managing Director of Koch Media.

As is the way with these joint announcements, GSC had something to say too. "Publishing the game Heroes of Annihilated Empires worldwide together with Koch Media distribution, we were happy of the cooperation and are glad to continue it with S.T.A.L.K.E.R.: Clear Sky project", said Sergiy Grygorovych, CEO of GSC World Publishing.

Valve announced last week that it has secured the exclusive rights to distribute the title online.

mike fonacier 28 Dec 2008 05:21
1/1
i love this game. the effects and textures are great. I finished the game and still Im longing for another episode. hope you can develop the next episode. thanks
Posting of new comments is now locked for this page.