But no Master Chief weapons... 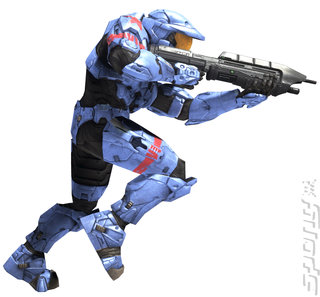 All Images (3) »
Tired of going up against 'Teen America' in Halo 3? Feel like maybe you want to get a bit more exercise with your Halo multiplayer experience? If so, we have good news! Later this year, gamers (and anyone else who fancies it) will be able to take their love of Halo into the great outdoors.

Corgi is bringing Halo 3 Laser Pursuit to the UK later this year. Remember Laser Quest? It's basically that, but with Halo weaponry. Well, Covenant weaponry anyway. Corgi says it's not able to import replicas of Master Chief's weapons because they're too... realistic looking. Apparently, there are concerns that we might want to rob the local off license with them or some such thing. Anyhow, the weapons that we will get will boast game-like features. The Plasma Rifle, for example, will overheat, meaning you'll have to reload to carry on.

America has had Halo 3 Laser Pursuit since October. Maybe someone thought the weather over here is too miserable for us to want to go outside. In any case, you'll be able to get the weapons for between Ł49.99 and Ł79.99 when they hit.

Corgi has also shown off a prototype replica of the Covenant Energy Sword at a Toy Fair in London. It's still early days, but when it gets released, there will be a replica to stick on your shelf and never touch and a version that will work with Laser Pursuit. Ł79.99 is what it will reportedly cost.

SuperSaiyan4 31 Jan 2008 13:00
1/3
I have seen the plasma pistol in my local Gamestation assume someone that traded it in since they are doing a 2 for Ł99 deal and its in the front window.

But would be keen on importing say an assault rifle of BR but cannot find it on the net.

Bentley 31 Jan 2008 15:39
2/3
Is there a rule somewhere on SPOnG that says "please make the first paragraph of your post one long, unpunctuated sentence with no grammar, point, or purpose; that makes no sense and reads like the dribbling scrawl of a dyslexic, drugged horse"? Because SuperSaiyan seems to think this is the case.

He makes the place untidy, is all I'm saying.

Wow, I never realised there was also a rule for someone to be a knob-jockey in response to each persons post. Wether his grammar is up to your standards or not (no one cares) doesn't necessitate your being a bell end.

It is in-fact, dear Bentley, YOUR posts which make the comments untidy. So cheer the f**k up and stop letting what someone says on the interwebs get to you.