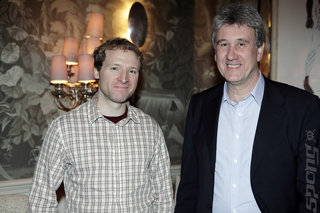 The awards are highly valued by developers, largely because they really do mean something. These are not trophies ?bought? by marketing and PR departments to increase the profile of the studio (which, lets face it, most other games industry awards ceremonies are). Rather, they represent a heartfelt congratulation to (and recognition of) those that have achieved outstanding work in creating videogames, voted on by people that matter.

Departing TIGA CEO, Fred Hasson, commenting on the awards, said ?The European development community represents some of the best talent in the world. The awards presented last night are treasured by the winners as they are voted by and presented by their peers.?

You can see Adam?s full report with photos from the ceremony over in editorial. Below, for those who cannot wait to cut straight to the chase, is the full list of winners on the night.


Richard Wilson (pictured left in the above photo) will take over the reins from Fred Hasson as the new CEO of TIGA, as of March this year. Kuju's Ian Baverstock, Chairman of TIGA, said: ?The appointments board was unanimous in selecting Richard for the post. He, like our current CEO Fred Hasson, has no previous games industry experience but has an impressive Public Affairs background and is understands issues relating to industrial sectors. We think he has the right qualities to build on Tiga?s achievements to date and take the organisation forward?

Outgoing TIGA CEO Fred Hasson added: ?We think Richard will be good for Tiga and more importantly the industry. There is still a massive job to be done in impressing on the public and the government of the significance and importance of the industry and its potential as part of a modern knowledge based economy. I urge the industry to support him and Tiga to continue to promote the best interests of the development industry?

Commenting on his new role, Wilson said ?I am delighted to have been appointed CEO of Tiga. It is a lean, innovative and effective trade association that does a magnificent job in serving the interests of UK games developers. Fred Hasson has been an outstanding CEO and it is an honour to follow him in this role.? He continued ?I am looking forward to campaigning vigorously on behalf of Tiga members, further enhancing Tiga?s effectiveness and raising the profile of the UK games development sector.?

Wilson was also keen to remind SPOnG last night of a few salient statistics - 59% of the UK?s population play computer games; the UK is the fourth largest developer of games in the world in terms of the hard cash generated; games developers contribute 30% of the country?s media exports and over 160 studios dotted across the UK employ over 9,000 highly skilled and creative people. SPOnG is more than confident TIGA has found the right man for the job and we wish him well for his new role. Rest assured Mr. Wilson, that we will certainly be badgering you for comment at every turn!