Probably not in memoriam of the Fischer King. 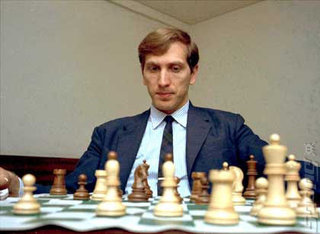 We know Rez from years of interviewing Mizuguchi about it... see like we said, interviewing him. In case you don't, you can visit ourRez page over here.

Still not happy? Well, "Rez HD is a frenetic, wire-frame adventure set to industrial beats and rhythms that match the action. The story of Rez HD takes players deep into the world?s computer network where they must hack the system, alter the visual output and take over the music, creating unique rhythms and eye candy as they dig deeper into the cyberworld".

See, that's what Microsoft says... frankly, we've never been that bothered with 'story' when it comes to Mizuguchi games. Rez was great on SEGA's Dreamcast and the PS2 un'all - forget plot though. Download it for 800 Microsoft points on Wednesday 30th January, the year of our Horde, 2008.

Next up is Software Toolworks... sorry, Ubisoft's Chessmaster Live.

Chess, in case you didn't know, is a mysterious game played for human blood by people with spines and enormous cajones in no-holds-barred battles that can last for hours of intense action. Apparently a revolutionary, multi-dimensional version of the game is available on something called a 'Board' which can be taken and used in something called 'the pub'.

The XBLA version is available on Wednesday January 30th 2007 for 800 Microsoft points.

The Absinthe Review Network 29 Jan 2008 20:00
2/4
It's so sad that casual gamers often put down this amazing title. Check the comments over at gametrailers.com and be amazed. I was almost tempted to register just to respond to that one video...
more comments below our sponsor's message

headcasephil 30 Jan 2008 11:38
3/4
happiest man alive (well in a strange way) as i a out of hospital and what i think the best game rez is out FINALLY after what seems years of not beeing able to play rez as my dc copy got nicked and not been able to find a copy

The Absinthe Review Network 30 Jan 2008 14:11
4/4
hardcore enthusiast like us aside...you think this will be a bestseller among stoners and the like?
Posting of new comments is now locked for this page.