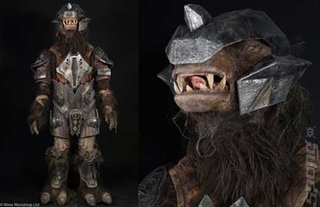 All Images (10) »
If there's one thing that's satisfying in this life, it's seeing games translated into live action 3D stuff in a purdy way. With that in mind, when Peter Jackson's Weta Workshop, the effects guys behind Neill Blomkamp's Halo film shorts, slung these pictures our way, we smiled.

Below you'll find shots of Weta's fully functioning Warthog, Brutes, men in action and weapons. Granted, the plasma pistol looks a bit like a toy, but the rest of it's looking goooood.

Microsoft has also just announced a Halo film-making competition. It's looking for gamers and film makers to create the lost adventures of Master Chief. The platform holder's not looking for films that just re-create the action of the games, however. Oh no, it wants us to get zany! "Master Chief?s 'Meet the Parents', a Spartan high school reunion, or even break dancing to MC Hammer" are the suggestions thrown out there...

Has anybody ever successfully 'broke danced' to MC Hammer?

Traditional film, game footage, animation and fancy-pants computer-generated content are all welcome, they just have to be in by March 21st.

A winner from each European country will be picked by a panel of industry experts and will win an Xbox 360 and copy of Halo 3 (which, let's face it, if they're bothering to enter this competition they will probably already own). A winner among winners will then be picked from the European finals to be sent off to LA to study at the New York Film Academy for one month.

You can find out more and enter from January 31st here.

If you've not checked out one of Neill Blomkamp's Halo shorts yet, SPOnG highly recommends you cast your eyes this way. For more pics from Weta, click here.
Companies: Bungie Microsoft
Games: Halo 3

Thats one of lifes mysteries, but im willing to pay a turkey, four bales of hay and a farthing to see someone do it - Stop -- Hammer Time!

Also how about, Master Cheif `Im a Celebrity", or `Master Che(i)f`

My daughter loves this kids CG animation called "Jane and the Dragon" (weekend mornings on Five). She's been watching it for months (not uninterrupted, but when it's on TV, smartarse).

I caught the end of an ep last weekend and was mildly amused to see that it's created by Weta.

It's got a pretty nice chalk drawing effect, and some nice character animation. Check it out if you're a CG geek. It's not too kiddy to be unwatchable by adults (like Tweenies or the fecking Wiggles).

tyrion 25 Jan 2008 19:17
3/5
haritori wrote:
Stop -- Hammer Time!
I want to see the film where Master Chief does dance like MC Hammer, then gets gravity hammered to that exact line of the song.

they were planted by the devil himself if i have to sit through another song about henry the fecking Octopus i will dig my ear drums out with wiggles branded spoons!