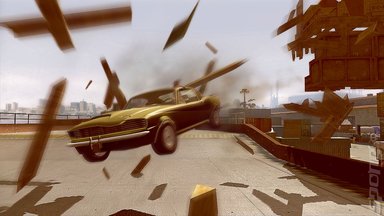 Stuntman: Crashed.
THQ has announced that its "...decision not to pursue its Juiced and Stuntman intellectual properties" as part of its plan to improve its ability to make money.

Why so? Well, although the company has raised its profit prediction to $509 million (Ł260m) from $490 million (Ł250m) (due to 'better-than-expected sales of WWE SmackDown vs. Raw 2008 and MX vs. ATV Untamed') it still expects to write off 'approximately $20 million (Ł10m) because Stuntman:Ignition, Ratatouille and Conan 'under performed'.

2) costs associated with two unannounced titles for Xbox 360 and PS3 that had been scheduled for release in fiscal 2010; and

3) the company's decision not to pursue its Juiced and Stuntman intellectual properties."

Lucky it's going to get Worms: A Space Oddity before this fiscal year ends then... it would probably have made even more cash had the game come with online though.

The corporate cover-up language goes on (does anybody seriously believe that people fall for this?) with news that Concrete Studios is to be closed. Here is how Brian Farrell, president and CEO of THQ, is quoted as putting it:

"The company also announced the closure of its Concrete Games studio, which was working on one of the unannounced titles. THQ expects a substantial number of the studio's employees to be offered positions in its other studios. The closure will be reflected in the company's fiscal fourth quarter results."

Okay, that actually is clear and concise and makes sense. But then he goes and ruins it all with:

"In October, we announced certain product quality initiatives, including personnel and structural changes in product development and a more rigorous internal and external product evaluation and feedback process.

"Consistent with these initiatives, we have taken actions to strengthen our pipeline and position ourselves to compete aggressively with compelling, high quality games."

Eh? So, it is closing a studio to ensure product quality? So, that an admission that games coming from Concrete were never really that hot? As for strengthening its pipeline for more aggressive positioning, well!

Also, it seems a bit harsh to close one studio only two weeks after buying a new one, in this case Big Huge Games.

I get sent spam emails about that all the time. What's wrong with how strong my pipeline is already?!