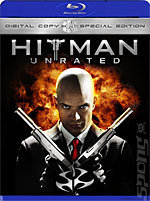 Fox Studios has announced that it's going to be releasing the recent Hitman movie on Blu-ray format in, "...a never-before-seen unrated cut" in March.

Nothing has been said of HD-DVD because allegedly Sony paid Fox $120m (Ł60m) to stay exclusively with the Blu-ray format. This move in turn brought Warner Brothers over to the format earlier this month. Well, this and $500m (Ł250m). Both figures come from the pen - and some would say the imagination - of columnist Don Lindich. His column in the Pittsburgh Post Gazette included both sums of money - until recently when Fox apparently contacted him. Following this intervention, not only were references removed from the newspaper column but also from his 'sound advice' blog. Even Google's cached versions have been cleared.

References to Warners had previously stated that it had told Toshiba (HD-DVD's main supporter) to approach Fox for exclusivity to the HD-DVD format. The blog now says, "Obviously, they (Warner) had decided to change- they just didn?t know the direction. Given their long partnership, Warner gave Toshiba an opportunity to lure a Blu-ray studio to HD DVD, in which case they would go HD DVD exclusive and give HD DVD a clear studio advantage. This did not happen (though it almost did) and Warner had no choice but to go with Blu-ray".

Fox's Blu-ray decision has been a no-brainer since December. Back then, James Gianopulos, co-chairman of Fox Filmed Entertainment said, "We believe that Blu-ray not only has the superior technology and backing in terms of strength to market but also the superior content protection".

If, on the other hand, you love your Xbox 360's HD-DVD drive - and are waiting for the rumoured 360 with integrated Toshiba-produced HD-DVD drive - you can always sign the "Save HD-DVD! (Warner Brothers, The Consumer Has Not "Clearly" Chosen Blu-Ray)" petition, which can be found here.

If, you're a Nintendo lover, you might just want to sit back and play your copy of Mario & Sonic at the Olympic Games and wait for the fuss to die down.

But I can safely say Blu-ray will win

john 22 Jan 2008 14:26
3/4
DVD looks and sounds great with the right player and HDTV. blu ray and hd dvd can both die, in my opinion neither are needed. now back to mario and sonic

Bentley 23 Jan 2008 11:35
4/4
For true next-gen games, we need a next-gen media format. But you can't see that if you're stuck playing on your Wii. Enjoy the gimmick while it lasts. I look instead to the future, and the future is Blu-Ray.