Nintendo shines with joy and sales. 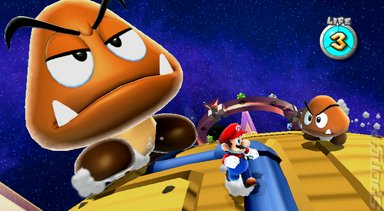 Super! Mario Galaxy comes back to the Top 10.
You know when people say obvious things such as, "If you got stock of those really good products into the shops, then you would have more sales"? You know how how it's so obvious that sometimes it gets overlooked? Kind of in the same way as, "Don't put that staple in your penis" or "There are no weapons of mass destruction Mr President"? Well, it would appear that despite generally poor sales of video games after Xmas, Nintendo's ability to get some more Wiis in-store is paying off.

We've already told you about the astonishing success of Mario & Sonic, which stormed into the Number 1 slot - yes we did, read it here. We can follow that up with the news that both Super Mario Galaxy (Number 8) and Wii Play (Number 10) have also popped back into 'The Ten' - that's the Top Ten All Formats, All Prices chart from Chart Track but we wanted to give it a more exciting (yet cheap) science fiction edge... 'The Ten'.

Moving on. According to Chart Track: "Every multi-format giant in the All Formats Top 10 loses sales except ?The Simpsons Game? which is up one place to No3 (+9%). Ubisoft?s ?Assassin?s Creed? slips from No3 to No6, EA?s ?FIFA 08? drops from No2 to No7 and Activisions?s ?Guitar Hero III: Legends of Rock? falls from No5 to No9. Sega?s light gun (Wii Zapper) game ?Ghost Squad? is a new entry at No20, just ahead of the official Wii Zapper bundled game ?Link?s Crossbow Training? which re-enters the Top 40 at No22".

You can see the entire Top 40 over here. For the impatient (or for the fan of cheap Sci-Fi), however, 'The Ten' is as follows - last week's placing is in brackets.