Guitar Hero Does A Billion

What a lot of dollars... 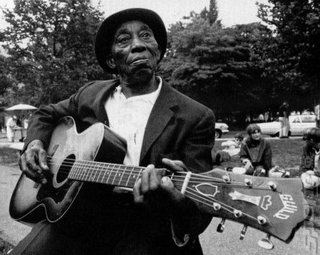 Mississippi John Hurt: now that's what we call a Guitar Hero.
Now, far from it for SPOnG to say anything too shiny and happy, but when a really rather good game franchise manages to make an vast - and we mean vast - amount of cash even we turn the corners of our mouths up a little.

Why? Well, because it means that we could expect more of of the really rather good game. Because the publishers might be goaded into being maybe a tad more adventurous and because the devs might be able to afford a holiday.

So, we're happy enough to pass on the fact that according to US statisticians, NPD, Acitivision's Guitar Hero franchise has chalked up $1,000,000,000 (Ł514m) in sales.

"Since its initial release in fall 2005, the Guitar Hero franchise has sold in excess of 14 million units in North America alone.

"In 10 weeks since the game's launch, consumers have already downloaded more than five million songs."

One billion bucks for guitar-based karaoke fun! Fantastic! Bet Blizzard, Vivendi and Activision shareholders are happy with that. It would also confirm that GH is a really rather important property to Activision... "Activision posted net revenues of $1.5 billion for the fiscal year ended March 31, 2007".

Now, with all that cash flowing in, it's got to be time for a really revolutionary game concept... hasn't it? Please.
Companies: Activision
Games: Guitar Hero Guitar Hero II

deleted 22 Jan 2008 23:36
1/1
All this is great but i think we have seen the best we will get, my theory is that GH4 = Cert, but somebody at Activision will say ok how about a new direction, but lets not copy EA`s Rockband lets make even more money by selling everything seperate,

they will sell a few million units of each to the various punters tastes and with each game suited to each instrument, then we will see some sort of GH5 or Rock Hero game that allows combination of all previous instruments but only sold as complete pack or solus, and as such meaning you would have to buy at least 1 instrument twice, or maybe its just me and my evil empire mind running away?