If you don't mind advertising that is. 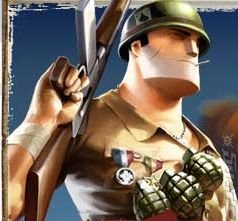 Buy 'Cas-o-Drag' from Ronco... it's Wound-tastic!
Electronic Arts has announced its first full, free game. Available for the PC, it's a "Play 4 Free cartoon-style shooter " called Battlefield Heroes and comes "..from the team behind Battlefield 1942 and Battlefield 2".

Free? Electronic Arts? Battlefield game? Downloadable this summer? Is there more? Well, yes there is. EA tells us that, unlike other Battlefield games, Heroes' "cartoon-style graphics and gameplay caters to players of all skill levels. It is easy to pick up and play but with robust character customization and a deep online meta-game, gamers can spend hours building up their characters and conquering the world".

Deep... online... meta-game. Cool! Well, it would be if we could understand what that means.

Anyway, Gerhard Florin, EVP Publishing Americas-Europe at EA, explains the plan,"People want to play games in new ways, with easier access that is quick to the fun. With Battlefield Heroes, EA brings its first major franchise to North America and Europe with a new distribution model and pricing structure adapted to the evolving way that people play."

Pricing structure? We thought it was 'Free to play'? Then again, Ł0.00 is a price. This is how that zero-quid pricing structure is going to be achieved - it "...generates revenue through advertising and micro-transactions".

There you go. Advertising and micro-transactions.

Yes, EA's first fully ad-supported game and it's aimed at PCs not consoles. Exactly what kind of advert will fit with a Battlefield game - no matter how cartoony - is one to ponder though. "Buy Jim's Guns! They're Great!" or "Sick of dragging casualties manually? Try the Chevvy Cas-o-Drag!' could do it.

It's always fun to see the return of micro-transactions though. That word is just so much more comfortable than, 'purchases' or 'money-spending'.

So, what do the developers think? Ben Cousins, Senior Producer at EA DICE, "With the new online model, we will continually add new content to keep the game fresh and keep players engaged, while integrating player feedback in real time. As a game developer, it is such a cool new way to make games."

Some gamers see advertising within games as a savage attack on the purity their in-game environment. Others can't see what all the fuss is about as long as the game is good quality and the ads fit the game world.

In the last six months (18 October 2007 to be exact) we saw EA's Need for Speed Carbon, taking advertising for GCHQ. This is the Government Communications Headquarters - or Spy-HQ. The campaign ran via the Microsoft-owned, in-game advertising firm Massive's network of games, with the tag-line "Careers in British Intelligence".

Whatever your take (tell us on the Forum) in-game advertising is here to stay. Whether it will simply be used to support already successful franchises and publishing companies or could someone be used to fund new and more original games and developers... well, that's probably down to public demand and response.

Battlefield Heroes will be released for the PC as a free download in summer 2008. This product is not yet rated by PEGI or ESRB.

No fixed date is available for the download from www.battlefield-heroes.com as yet.
Companies: Electronic Arts
Games: Battlefield 1942 Battlefield 2 Battlefield Heroes

Micro-transactions - I really hope the public have the sense to see these for what they are - an opportunity for publishers to make more money for a game than they would through normal sales alone which means ultimately games cost us more. Stealth tax if ever I saw one. Although it's not a tax. But it's as bad as one. I'm rambling now. 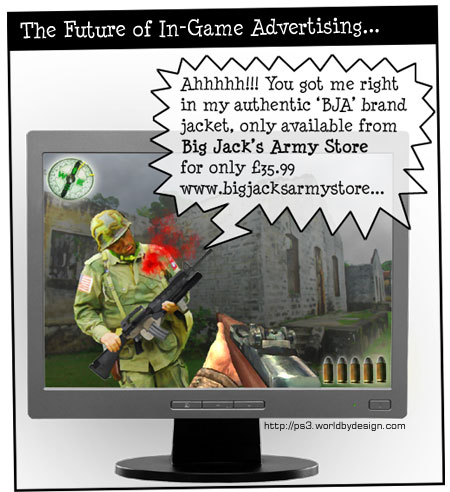