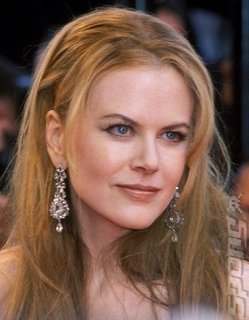 Kidman: Trains brain. Leaves Cruise. Maybe there is something in it?
Nicole Kidman (ex-BMX Bandit) and Patrick Stewart (ex-Star Trek) have been slammed by an organisation called 'Sense About Science' for their claims that Nintendo's Dr. Kawashima's Brain Training improves your cognitive faculties.

The charitable organisation, which states its aims as "promoting good science and evidence in public debates", has looked into various scientific claims made by celebrities during 2007 and consulted experts to put the assertions to the proof.

Ms Kidman (ex-Young Talent Time), who has fronted ads for Nintendo's More Brain Training, has gone on the record about Nintendo's Dr. Kawashima products to say "I've quickly found that training my brain is a great way to keep my mind feeling young".

Well, it might feel young, but it sounds like Nicole might have been kidding herself. Dr Jason Braithwaite, a cognitive neuroscientist at the University of Birmingham, says, "There is no conclusive evidence showing that the continued use of these devices is linked to any measurable and general improvements in cognition.

Gods but scientists can take the fun out of anything can't they? What with their wanting testing and proof and peer reviews and more proof!

Patrick Stewart (ex-Jackanory) didn't come off quite so badly, having just told The Sun 'newspaper' that "getting my Brain Age down to 33 has become a fascinating and stimulating way to relax." Phew! After all a 'Brain Age' is provable science isn't it? After all Albert Einstein's 33 year-old brain was exactly the same as George W Bush's, right? Right?

Other celebrities corrected by 'Sense About Science' for misinforming of the public include Gwyneth Paltrow for her claims about the cancer-preventing properties of 'biological' foods (but not for claims that Sky Captain and the World of Tomorrow was watchable).

SPOnG, cynical bastards that we are, took a poke around Sense About Science's website to find out just what the organisation's agenda is. Having seen populist science writer Simon Singh on the board of trustees, and Richard Ayre, former head of BBC News, on the advisory board, however, we're reassured that these guys want nothing more than to promote truth and good research. If that involves taking on vapid celebrities, SPOnG says so be it!

Despite the claims put into the mouths of well-paid celebs regarding Brain Training might have had more validity coming from people who actually know what they're talking about, SPOnG's really not too worried about the games' sales taking a hit.

The original Brain Training kept popping in and out of the Top 10 in the Charts right through 2007. If you don't believe us, check out the number of Charts news stories under related editorial on SPOnG's dedicated game page.

Frankly, SPOnG sees this whole thing as evolution taking its course. If you want to believe that Nicole Kidman and Patrick Stewart are authorities on neuroscience, then you deserve everything you get - and that'll be another series of Big Brother. However, if you take the advertising with the truckfulls of salt that all advertising should be taken with, and simply want something more constructive than imagining babies to do with your DS, then we applaud you.
Companies: Nintendo
Games: Dr Kawashima's Brain Training: How Old Is Your Brain? More Brain Training from Dr Kawashima: How Old Is Your Brain?

There was a story reported on Spong some time last year that kids in a school in Scotland who use Dr Kawashima's Brain Training on DS got significantly improved results across the curriculum, not just in the specific tasks of the software.

Plus, if shampoo adverts can say that your dead hair can look and feel "healthy", what's wrong with saying that using your brain can make it feel young?

realvictory 4 Jan 2008 13:32
2/6
And the point is, whatever people think it's improving or why, it does actually improve your brain, in some way or another.

Doing something improves your ability at it - if it made you worse, then maybe there would be a valid reason to criticise it.

Rod Todd 4 Jan 2008 15:38
3/6
I put it to you that this so styled, self called "Dr Jason Braithwaite" is a cock monkey, and that "Sense about Science" are a set of boring self-important attention seeking bedroom-dwellers who have few friends, and no girlfriends between them.

I know who I trust.

DoctorDee 4 Jan 2008 15:43
4/6
After all a 'Brain Age' is provable science isn't it?
String theory isn't provable science, but I don't see SPOnG sniping at Edward Witten.

As for this dumb attention seeking scientist, all this is, is a rain on your parade for the sake of it blast, from a scientist who would rather criticise hired actors/actresses. Wouldn't it be wiser to appraoch Nintendo's Dr Kawashima himself? Perhaps he doesn't respect his fellow scientist or Nintendo enough to do so.

Nothing to see here, move along.