Get Agricultural On Wii's Virtual Console 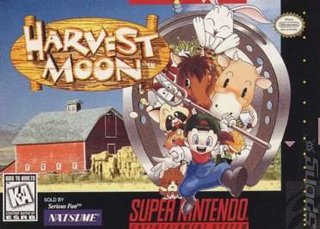 All Images (67) »
If you like leaning on your hoe and moaning about EU grants, Nintendo has a treat for you today. Harvest Moon has become the first Virtual Console title of 2008.

Originally released on the SNES a decade ago, Harvest Moon sets players the task of making their farm a viable concern. Players will go about their day-to-day tasks of tending the crops, milking the cows and herding the sheep. Not to mention getting laid! Well, not laid exactly - but you'll want to try and get married and have kids, so getting laid is implicit. You can get it for 800 Wii Points. Get the game, that is...

In case you were too busy wading through drifts of wrapping paper on Christmas day to notice, SPOnG also feels obliged to let you know that December 25th saw the release of Donkey Kong Country 3: Dixie Kong?s Double Trouble! - the final entry into the Donkey Kong Country series. It's another SNES release (it first saw the light of day in 1996) so it'll set you back 800 Wii Points.