The Charts: Call of Duty is Assassinated 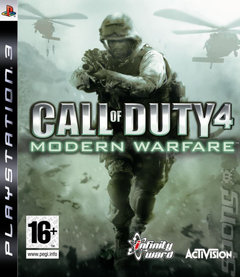 If you wasted time watching what we at SPOnG like to call 'The Idiot Box' prior to and during 'The Holidays' you will have seen the rather nice advertisement for Ubisoft's Assassin's Creed. It's the one with - for some reason - Massive Attack's Teardrop accompaniment.

Well, gods-blind-us if it didn't just work for Ubisoft. The French company saw its 2007 flagship title confound critics - who were mostly lukewarm about it - by replacing Activision's Call of Duty 4: Modern Warfare as Number 1 in the UK All Formats Charts.

Looks like the pretty graphics, the pleasant soundtrack and the Crusadery costume all on the telly-box have done the trick. In fact, the charts in general reflect a populist take on the idea of video gaming as a pastime. Grannies and parents have all recognised the value of brands with FIFA, WWE and The Simpson's retaining Top 10 positions; movie-tie in The Golden Compass also makes an entry.

So, yes, all is calm, predictable and sleepy in the charts... here are the details:

Call of Duty 4, which spent Christmas at Number 1, is relegated to Number 3 after a 37% drop off in sales. It's Electronic Arts' FIFA 08 that sits above CoD4, missing the top spot by just 1,000 or so sales with FIFA 08 - one of just two games to see an increase in sales this week.

The other game to see an increase in sales was another footy offering, with Konami's Pro Evolution Soccer 2008 clambering back into the Top 10 at Number 6 after lurking at unlucky Number 13 last week. Could this be to do with blanket advertising all Premiership (Division 1 as it really should be called) stadia and therefore on the telly? We think so.

THQ?s WWE Smackdown Vs Raw 2008 hangs on to Number 7, despite a 43% drop in sales. Nintendo?s More Brain Training sits below it, sliding two places to Number 8. It's predecessor drops out of the Top 10 for the first time in 9 weeks, however - slipping from Number 10 to Number 11.

Activision and SEGA round out the Top 10. Guitar Hero III rawks up from Number 12 to Number 9, while The Golden Compass is up one place to sit at Number 10. Alas, last week's SEGA representative in the Top 10 ? Mario & Sonic at the Olympic Games ? falls all the way out of the Top 40 thanks to a lack of stock.

Expect a few shuffles and not a lot else in the Charts next week thanks to a bare release schedule. You can get this week's full Top 40 here.

But here's the Top 10 as a New Year gift (last week's position is in brackets).

Happy New Year to SPOnG and all your readers. Apart from SuperSayan or whatever who is obviously an idiot but I vow not to let that fool wind me up this year. Well, for five minutes at least. Sometimes people are so dumb you have to take them up on it. So maybe instead I will apologise in advance for letting that idiot get to me.

And well done to Ubisoft for replacing a worthy number one with one of the most spectacularly dull titles I've played in ages. Looks nice. Great elements. But where is the soul in this game? Stolen by a chav in a hoodie, I'd say.

Apart from Call of Duty 4, those charts are also pretty damn dull. Best game I played over Christmas was SingStar, but no sign of it there against the usual suspects. With an EyeToy attached and a room full of ladies, it's awesome. Although worryingly, I out-Britneyed the lot of them. I dunno what that says about me.