Two of the greatest games in the history of ever... 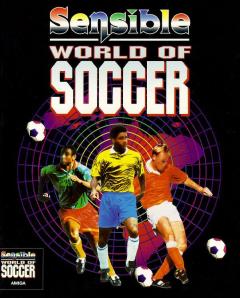 If only we didn't have to have that cheating **&^ Ronald Kuman on the right.
All Images (2) »
Five words can mean so much to old people as we discovered this morning when we said, "Sensible World of Soccer" and "Tempest" to the evil editor. He grinned (or maybe drooled a little) and fell off his chair.

When we then said that both these rock-solid classics were going to appear for real on Xbox Live Arcade tomorrow (that's Wednesday 19th December if you're reading this in the future... or the past, but that's incredibly unlikely) he actually died of happiness.

We brought him back to life with the Burnout Paradise demo on PS3 and further explained that, ?Sensible World of Soccer draws on the 96 / 97 original to re-create one of the most influential games of all time for the first time in HD.

?Tempest is an intense shooter game requiring skill and lightning quick reflexes. Players must harness their firepower to shoot and destroy enemy hordes in a desperate fight for survival across fluorescent geometric battlefields. Tempest contains both the original and enhanced gameplay modes."

Of course, we didn't say that, Microsoft did. We'd never say "hordes" when we mean "horde"; nor would we describe Tempest as 'an intense shooter' when it is in fact "a life-changing downward facing vertical holy experience requiring the accumulated skill and reflexes of every gamer in history pooled into your body".

Sensible World of Soccer will cost you 800 Microsoft Points (approximately Ł6.80).
Tempest will cost you half that (the fools!) at 400 MS Points.

Both are available from 09:00hrs tomorrow morning.

You sure he didnt stay dead? Cos thats the s**ttest Burnout to date.

tyrion 18 Dec 2007 14:16
2/5
SuperSaiyan4 wrote:
You sure he didnt stay dead? Cos thats the s**ttest Burnout to date.
You have so soul. It's great fun.
more comments below our sponsor's message

You sure he didnt stay dead? Cos thats the s**ttest Burnout to date.

I can - I think - vouch for the fact that I am indeed not dead. I know this because I have just kicked myself for bothering to respond to your posting.

Just exactly why is it the s**ttest Burnout to date then - and don't start by telling me it's because we mentioned PS3.

SuperSaiyan4 18 Dec 2007 16:53
4/5
You want to know why? Firstly its nothing like Burnout its more like EA's gone wrong NFS series - more like Underground I mean why the hell do I want to go around to a garage to refill my boost?? It was soo easy to get it in the last 2 games and now we can just go into a garage?? Also no hitting traffic, starting races by holding down the 2 triggers...

EA f**ked up NFS and now this, sure it looks great but its nothing like what Burnout out was and you are the same guy that found Mass Effect boring...I rest my case.

tyrion 18 Dec 2007 20:45
5/5
SuperSaiyan4 wrote:
Firstly its nothing like Burnout its more like EA's gone wrong NFS series - more like Underground I mean why the hell do I want to go around to a garage to refill my boost??
Why not? It's an excellent mechanic. In a race you have the option of trying to up your boost by doing "normal" Burnout things like power slides and racing into oncoming traffic. Or you can try a tricky at speed and possibly out of your way trip to a petrol station. Either one ups your boost, but there are choices and that's what this game is about.

SuperSaiyan4 wrote:
Also no hitting traffic, starting races by holding down the 2 triggers...
The worst thing in Burnout Revenge was traffic checking, I'm really glad they ditched it. There's no skill involved in holding down boost and aiming for the cars going your way. And it takes you away from driving into oncoming traffic which was the best part of the previous games.

If you don't like sandbox then say it, but Burnout Paradise is a very good use of sandbox in a racing genre. And the "races start as traffic lights mechanic" makes complete sense in a street racing game.