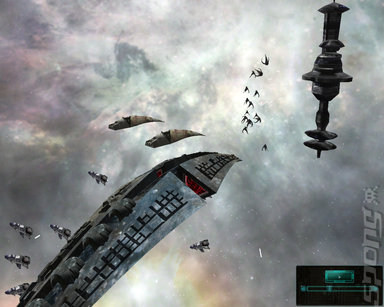 Publishers Paradox recently whipped Mark SPOnG across the North Sea and over to the incredibly flat capital of of Denmark that is Copenhagen to take a look at Lost Empire: Immortals, Penumbra: Black Plague, and Europa Universalis: Rome. Here's what we saw (minus the baffling Danish food).

Lost Empire: Immortals, if it's new to you, is a turn-based strategy title from Pollux Gamelabs set in the vastness of space. Two things jumped out. The first is the sheer scale of the game. There are some 5,000 star systems out there for strategy fans to colonise, each with features that will make them suitable for different uses such as agriculture or trade.

The scope became particularly apparent on seeing the game's viewpoint pan out to show the entire galaxy. Galaxies, it turns out, are pretty big places. There are six main races that players can opt to control, with each having its own quirks for players to get to grips with. The Humans, for example, (warlike beasts that we are) have a tendency to house drone fighters in the hulls of their starships. The Tridents, meanwhile, spend all their time hanging out underwater. In addition to the major races, you'll find a score of other minor races to contend as you get on with your colonisation of the Great Beyond.

The other thing that caught our eye was the battle engine. Once you've sent your fleet off to duke it out with an opponent, you'll see the battle enacted in 3D glory. Basically, you're put in the position of director (or producer, maybe - you don't get hands-on control of the fleet's actions) of your own epic space battle. You'll be able to manoeuvre your viewpoint as you watch various weapons flash across the blackness of space.

Up next was Penumbra: Black Plague, the follow-up to Frictional Games' Penumbra Overture. In a nutshell, it's a PC adventure-horror title with the focus firmly on 3D puzzle solving. Such is the focus on puzzle-solving, in fact, that Frictional Games has opted to remove combat from the game entirely.

You're a "sissy man", Frictional said. As such, the developer doesn't want you finding ways to mash up the game's nasties, as players of the original were managing to do. Rather, the focus is on using your brain and your mouse-controlled floating hand to manipulate the environment as you try to suss out the mystery behind your father's death.

The idea here is that having a great big gun in your hand doesn't really create the air of impending doom that Frictional is aiming for. As such, a lot of time has been put into the game's physics, with Frictional explaining that the accuracy and stability has been enhanced since Overture. There "can be tens of ways of solving (puzzles)", apparently.

The plot unfolds against a suitably gloomy and ominous backdrop of run-down facilities and caves, with left-behind notes, recordings and visual clues telling the tale. To make the story flow better, however, Frictional has included text on the load screens giving an overview of what's happening - a feature not previously available - so that if you miss a beat or two you won't be left trawling backwards through the game.

Alas, it was explained that no Wii version is in the works, although the control mechanism looks like a superb fit for the Wii Remote.

Last up was the first ever showing of Europa Universalis: Rome from Paradox Interactive. The game has taken the central tenets of previous entries into the series - turn-based strategy set against an historic backdrop - and taken it all the way back to Roman times. The start of the Punic Wars in the early days of the Roman Empire, to be exact.

The action centres around the Mediterranean, dipping down ever-so-slightly into Africa and going as far north as barbarian countries such as the UK.

Players can kick off as any of 50 factions, including some of the aforementioned barbarians. You'll want to bear in mind, of course, that while some factions were on their way to becoming nicely civilised states (Rome) some were little more than tribes running around in skimpy loincloths (the Brits).

While it was suggested that you might want to set smaller goals than outright domination of the known world for smaller tribes (like just surviving) it's probably not going to take too long for some smart Alexander strategy gamer to go off and bring the Celts to power.

There's oodles of depth involved. Game elements such as trade, agriculture and religion are stacked with heavily-researched stats that ought to keep those craving a rich experience of statesmanship happy. Similarly, leaders have been well-researched, with the history and stats (charisma, martial, finesse) for each all on offer. Character development is heavily emphasized - but watch out: the Roman Consul is up for change every two years. Since you play as a faction rather than a leader, you won't be dethroned, but a character you've spent a lot of time developing might be.

Lost Empire: Immortals and Penumbra: Black Plague are both aimed at the first quarter of next year, while Europa Universalis: Rome should be available by June.

PistolPete 13 Dec 2007 20:21
1/1
Europa:Rome... the synopsis sounds familiar.. minus the agriculture, I suppose but still.
Posting of new comments is now locked for this page.