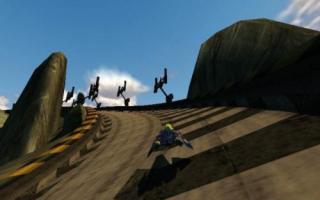 All Images (3) »
Sony Computer Entertainment is planning on making its stand at E3 the only place to be, announcing Wipeout Fusion and WRC 2001 will be in playable form.

Thus far, Wipeout Fusion has only been shown in video form, with only one ship on track and with no weapon support. SCE says it will be showing the game, “At about 90% complete. We are trying to iron out any fatal glitches, as we don’t want to be running around resetting consoles for the duration of the show,” a Sony spokesman told us.

Also on show will be WRC 2001, a rally game of such epic proportions, it must have a few developers at Codemasters a tad worried. WRC 2001 has been knocking the socks off everyone privileged enough to see it running for about six months now. Built on a brand new integrated 3D and physics engine, the initial builds have looked beautiful, the track environments shown to be colossal with proud developers showing the rally cars speeding along from high up in the virtual sky.

WRC will also be in playable form for the first time, making a tentative 2001 release seem much more likely.

This announcement will surely see Sony steal the show this year. The PlayStation 2 has come in for some heavy and deserved criticism for its complete lack of AAA titles in the first 12 months on sale.

Along with games such as Rayman M and Silent Hill 2 from third party publishers, it looks like this year’s show will be dominated by PlayStation 2.

Rumour: Sony will also be showing the controversy-dogged The Getaway in playable form.