Arnie Turns His Back On Conan 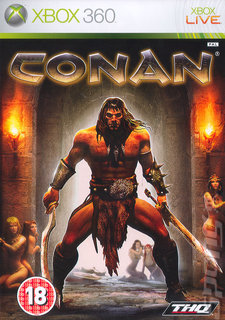 Someone has only gone and told former Conan-actor and now California governor, Arnold Schwarzenegger, that for some reason he'd better disassociate himself from THQ's recent Conan game.

Here's what we said about the hack'n'slash, "It's bloody and brutal and fully warrants its BBFC18 certificate. Not for the lily-livered gamer, for sure".

Governor Schwarzenegger (via a spokesman) has told the world that he has "no association with this game". Okay there, Arnie.

We have no association with Clive Barker's Jericho - but we don't feel the need to tell everybody all the time.

The reason that Schwarzenegger - whose website contains what can only be described as a bomb-setting simulator - has put his head above the parapet is that he's also supporting a law to ban sales of video games to the under 17 market.

The law has been written by our old friend, San Francisco Democrat Senator Leeland Yee. Frankly, we think that Arnie is just attention seeking.

PreciousRoi 11 Dec 2007 15:58
1/11
Nah, its Hollywierd Egobuisness...he really DOESN'T have any association with the game, and wants to make sure they don't make any money off his name, on a project he had nothing to do with. Not saying he doesn't have other motives, but even if he wasn't Der Governator, he'd want to distance himself from this, if not paid handsomely.

Earl 11 Dec 2007 16:08
2/11
Kinda funny that to overkill gun crazy KILL KILL hollywood superstar makes a stand like this.... part of becoming an old phart i guess.
more comments below our sponsor's message

Tim Smith 11 Dec 2007 16:12
3/11
PreciousRoi wrote:
Not saying he doesn't have other motives, but even if he wasn't Der Governator, he'd want to distance himself from this, if not paid handsomely.

Cobblers. He's distancing himself because of a puritan desire to force into action a law predicated on the hilarious principle of 'ultra violence'.

Why hasn't he distanced himself from the comics? Or from the 2004 Conan?

Go on, answer me that... I'm in a right rotten mood this afternoon. I had forgotten that Christmas could be quite this grey and miserable.

DoctorDee 11 Dec 2007 16:30
4/11
Tim Smith wrote:
Why hasn't he distanced himself from the comics? Or from the 2004 Conan?
Maybe because the character on the cover of the 2004 Conan is clearly some kind of Asian Conan, with his shiny black hair. Only an idiot would confuse this character with Arnie's famous representation of Conan.

But the character on the new Conan package appears to be based on Arnie's Conan. Despite the in game character (apparently) having dark hair.

Tim Smith 11 Dec 2007 16:39
5/11
DoctorDee wrote:
Maybe because the character on the cover of the 2004 Conan is clearly some kind of Asian Conan, with his shiny black hair. Only an idiot would confuse this character with Arnie's famous representation of Conan.

I refer you to Conan. In which the claim is made by us that:

...inspired by the original stories of R.E. Howard, and obviously influenced by the early work of a certain Mr. Schwarzenegger...

heres the gift of knowledge!

Hitler and Mussolini announce they are at war with America which retaliates with its own declaration of war on "the forces of savagery and barbarism".

"savagery and barbarism" >>>>>also fits with the main post of Conan, hey hey

Merry Winter! Every days a party :-) well with the exception of the 11th of december 1941 although the germans may have had a party

PreciousRoi 12 Dec 2007 06:10
8/11
Arnie's Conan is a Gaming Culture demigod, his "What is Best in life?" speech, speaks to the soul of every hypercompetitive online gamer. Would that we had that technology...pwning noobs would be that much sweeter...I want lamentations dammit, millions for breast physics, not one cent for lamentations...

RiseFromYourGrave 12 Dec 2007 16:45
9/11
i imagine his advisors told him to say this to cover his bases, considering he is currently championing some restrictive laws about gaming. I wish he had something to do with Conan, i have it for 360 and its a hoot. wouldve been better for arnie's wooden austrian delivery and strange growls and cries though

I really doubt it. I have often imagined the scene on December 7th 1941 in Hitler's office with the arrival of the communications clerk looking terrified.

"Would you like the good news or the bad news, mein Führer?"

"The Japanese have show that they are well committed to World War II, innit, mein F."

"They have bombed the United States Pacific Fleet base at Pearl Harbour and they've done it without provocation, sir."

"Mein Gotterdamarung on a bike! They've done what??! Quick, call Joe Stalin and ask him about that pact."

See, I don't think they Germans and Italians wanted to declare war on America. If only there was a video game we could play that could present us with that kind of a 'what if' option....

Merry Winter to you too.

PreciousRoi 12 Dec 2007 18:51
11/11
Oh yeah, Adolf was not pleased, no sir...until that point, he was probably counting on a eventual seaparate peace with Britain...he really didn't want to fight with y'all so much either, German honor had been satisfied kicking the BEF offa the Continent and allowing it to escape. Not that the Japaneese had much choice...we more or less drove them to it...

The Germans might have been the ones in the best position to appreciate America's potential industrial capacity...but I don't even think we really knew what we were capable of...and that's WITHOUT going to a total wartime economy. Our access to raw materials, mechanization and industrialization freeing up vast sections of the population and leveraging their output...it would be hard to pick a worse time to piss us off...except November 2001, we were a bit tetchy then, and I don't think anyone would have wanted to come between us and whoever, I'm sure there were lots of our putative enemies walking on eggshells that month... The outrage over the 'sneak attack' making the population accept with few complaints the relatively (compared to Europe, and other directly affected areas) inoffensive social changes demanded by the war.
Posting of new comments is now locked for this page.