Wise words from The Nugget 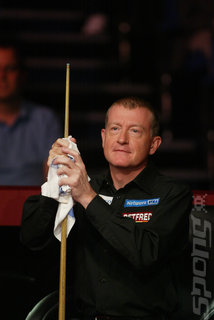 SPOnG recently caught up with snooker legend, Steve ?interesting? Davis, to quiz him about his videogaming habits for our regular GameStarz feature.

Steve had some commonsense advice to the tabloid scaremongers out there. When we asked him what he thought of the recent decision by the BBFC to ban Rockstar's Manhunt 2, he told us in no uncertain terms:

"Not aware of the Manhunt game but it's obviously all bollocks! Kids used to play cowboys and indians and everyone used to go "aaaah!"...kids are not stupid. And as far as the mass murderers? Well they're are not going to be stopped by confiscating their joysticks. Their sickness has nothing to do with the fantasy of videogames."

It?s a shame Davis doesn?t sit on the Video Appeals Committee ? the group that is currently deciding the fate of Rockstar?s Manhunt 2 in the UK. (SPOnG has put a call in with Rockstar UK again this morning for an update on that, so stay tuned for more shortly?)

We also asked Davis about his earliest memories of playing videogames. He donned the rose-tinted nostalgia specs and told us about his experiences of the early days of gaming:

"The hero in the Romford Snooker Centre was 'Screwy Lewey' (forgotten his real name. Not sure if I ever knew it!). (He was) An average snooker player, apart from his huge cue power and the ability to play fantastic screw shots. However when Space Invaders landed into our little world, Screwy became an overnight legend. Rumour had it that he could hit the spaceships blindfolded and also that he could actually bend the bullets...Screwy was also brilliant at Pac-Man, Defender, Missile Command and every other game that went into the club. We all wanted to be him and I was World Champion at the time!"

Check back shortly for the full interview, here on SPOnG.

Steve was most recently seen promoting Koch Media?s World Snooker Championship 2007-2008, starring in a particularly funny viral ad taking a pot-shot at Nintendo?s Nicole Kidman ad campaign. SPOnG urges you to Google ?Steve Davis DS? on YouTube if you have yet to see it!

YenRug 10 Dec 2007 15:57
1/2
I notice no one's picked up on the news that the European version of "No More Heroes" is going to be blood free? Rising Star Games have decided to release the "black ash" version, as published in Japan, and have admitted ("Maybe") that the Manhunt 2 ban has affected their decision.