The Charts: The Need For Creed 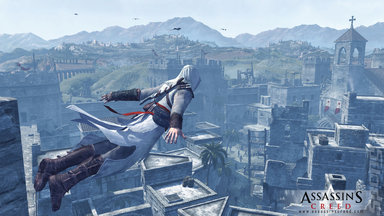 After a couple of weeks of riding hype and defying lukewarm reviews to stay at Number 1 in the UK Charts, Assassin?s Creed has been brung low.

...Electronic Arts' Need for Speed: ProStreet. The other good news for EA is that for the last four years, every game that was at Number 1 at this point (Week 48) stayed there all the way up until Christmas.

So, for your reference, here are those last four champeens:

EA's kept from dominating the Top 3 by Nintendo, with Dr Kawashima's Brain Training climbing from Number 5 to Number 2, propelled by a 32% sales jump. It also records the biggest ever sales week for a DS title, with 27% of UK DS owners now having a copy.

EA's The Simpsons Game is only a couple of hundred units behind the good doctor, however, at Number 3. It's followed up by another EA title, FIFA 08, which leaps five places to Number 4 with a 38% rise in sales across seven formats.

Call of Duty 4 from Activision drops two places to Number 5 (you can find a review of it here). Unfortunately for Activision (or Activision Blizzard), that's the publisher's only Top 10 entry this week. Guitar Hero III (which, by the way, rawks) drops down a place to Number 11.

It might come as a shock to Nintendo to see that the best performing game with Mario in it isn't one of theirs. Mario & Sonic at the Olympic Games, published by SEGA over here, climbs seven places from Number 14 to Number 7.

Mario & Sonic at the Olympic Games also earns the honour of having the biggest ever sales week for a Wii title. Yes, it apparently sold more than Mario Galaxy, which slips from Number 7 to Number 12.

Meanwhile... More Brain Training jumps four places to re-join its predecessor in the Top 10 at Number 9, while Big Brain Academy also has a jump, climbing from Number 21 to Number 15. Sight Training for the DS continues the Nintendo self-improvement streak, entering the Top 40 in its second week of release at Number 22.

Capcom's Resident Evil Umbrella Chronicles makes a disappointing Chart début at Number 28 as the only new entry. Sales may well take a jump next week, however, when Link's Crossbow Training is released, making the Wii Zapper available and allowing gamers to get the most out of Umbrella Chronicles.

Found a copy in gamestation eventually though.

SuperSaiyan4 4 Dec 2007 12:02
2/3
And its not because EA games are that great its just that its on every damn platform and people just buy them. NFS: Pro Street is absolutly s**t but sometimes even s**t can sell I guess.

tyrion 4 Dec 2007 12:49
3/3
SuperSaiyan4 wrote:
And its not because EA games are that great its just that its on every damn platform and people just buy them.
There should be more attention paid to the per-format charts I think. This week the top selling game for a single platform was Brain Training, second was Mario and Sonic and third was more brain training. The first mention of ProStreet was at no 7 on the PS2.

So yes, the wide release tactic does work very well for EA.