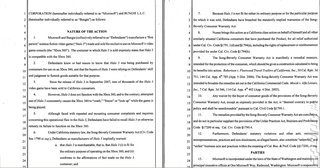 Part of the Class Action Suit. Brilliant!
The American legal system, eh? Brilliant! Smart-arsed litigants looking for clever-bugger ways of extracting cash in cahoots with lawyers unable to see beyond their Audis? Brilliant!

Well, it's not so funny if you're a pair of companies called Microsoft and Bungie who have been slaving for ages over a little game called Halo 3 and then some San Diego resident by the name of Randy Nunez decides to sue your sorry asses.

Why would Randy (stop it at the back) being trying to get a posse together for a class action suit, claiming that Microsoft and Bungie (the Defendants) have produced a game that is incompatible with the Xbox 360?

Money! Well, actually, you can see the full Class Action over at Justia but, here are the details in precis:

1) Halo 3 does not function with the Xbox 360, and on the contrary, attempted use of Halo 3 consistently causes the Xbox 360 to "crash", "freeze" or "lock-up" while the game is being played.

2) The Defendants have failed to recall Halo 3 or otherwise remedy its failure to function on the Xbox 360.

3) Because Halo 3 is not fir for either its ordinary purpose or for that particular purpose for which it was sold, Defendants have breached the statutorily implied warranties of the Song Beverey Consumer Act.

The upshot to the beginning of what we're not starting to call "The Case of the Century" is:

Five Million Dollars for at best a dodgy Xbox 360 and/or copy (or copies) of the game? Brilliant. One of the older SPOnGers is now thinking of suing Polydor over a copy of what he calls a "Long Playing Record". The LP in this case is 1984's Rattlesnakes by Lloyd Cole and The Commotions. The reason? It not only refused to play on his "Stereo Record Player", it also damaged the 'needle'.

Damages of up to a trillion-billion quid are being mentioned.

Frankly, as long as the great country of America keeps up this kind of thing then Al Qaeda can simply hang around and wait till everybody has sued everybody and no one has any energy left.

HALO 3 pissed me off soo much I have stopped playing it.

I think the single player missions were alright. I had no problems with it. Enjoyed it nontheless, but there were parts which pissed me off to the max!! However, on the online side of things, I hate it when I slap someone in the face and they live... Only to slap me after and I die!

But I'm the same with you on the 'not playing Halo 3 anymore' front.... Goddamn CoD4 and Mass Effect!

SuperSaiyan4 29 Nov 2007 16:25
3/13
Aint touched COD4 much in a while but that also has some issues online. Mass Effect oh boy on my second run through and its awesome you can choose 'Existing ID' and start a new game with ALL items and money and stats and level!!

Oh, that's me due for a flaming when my review hits then.

Oh, that's me due for a flaming when my review hits then.


Your review and review of many sites is an opion of the person who has reviewed but can serve as guidance to let others in on how the game is overall again giving their own opion.

Mass Effect isnt without fault it has frame rate issues and some bugs with the party you control in the sense they either get stuck or dont move as you would hope them to have moved but are very good in using powers themselves if you select the option to allow them to do so.
The other issue is because of the Unreal 3 engine it uses 'streaming textures' and in many cases the textures take ages to load.

But overall for gameplay its out of this world ;-) haha

Tim Smith 30 Nov 2007 09:59
6/13
SuperSaiyan4 wrote:
Your review and review of many sites is an opion of the person who has reviewed but can serve as guidance to let others in on how the game is overall again giving their own opion...

But overall for gameplay its out of this world ;-) haha

Well, that's my review flamed then.

Rod Todd 30 Nov 2007 10:53
7/13
SuperSaiyan4 wrote:
But overall for gameplay its out of this world ;-) haha
I found it to be a bit... well. Boring. It was impressive and everything, but not involving, or interesting. I see this as a fault in any video game.

It feels quite like KOTOR actually but KOTOR was clearly a much bigger game as in more environments, missions, side missions and better dialogue imo.

But Mass Effect might not be appealing to everyone but if you loved KOTOR it would be strange to say this game is boring in comparison.

But to be fair I dont think it would be fair for you to pass judgement on a review to say 'This game is boring...'

If you found the game boring I think you might have to find someone else to review it or word in differently perhaps. I have been waiting for a very long time for this game and I extremely enjoy it.

I mean if you liked Mario Galaxy more than than Mass Effect then there is something clearly wrong lol!

board 30 Nov 2007 18:49
9/13
I haven't played Kotor but i played Mess Effect for about 2 hours and you know what? It was just a dull interactive story with a couple of (dead easy) shootouts and LOADS of running about because I'd been told to go to some bar to find someone then go to the hospital because he wasn't at the bar. When I found him he told me to go somewhere else to get some more information. The conversation choices I was given seem to all lead to the same conclusion and the loading time was horrible (all those elevator sand transprts were just blinged up loading screens). After 2 hours the story hadn't really developed. tbh I'd rather read a decent book because it doesn't have the bullshit pretence of being interactive and won't have loads of boring running about or waiting for loading.

PreciousRoi 2 Dec 2007 03:28
10/13
DUDE, easy...I played Mass Effect. I enjoyed Mass Effect. But if Super Mario Galaxy has half the flaws in Mass Effect, it has problems...and I haven't heard anyone bitching about SMG .

Mass Effect is no KOTOR, I'd expect more from BioWare. For one thing I have no idea how the conversation controls got past QA. They suck, hard. X button is supposed to skip through dialog, but it also chooses dialog, which is also the function of the A button...so its was easy, and quite common for me to accidentally choose a different response than I would have if the controls worked as they should. This was, quite frankly, maddening, and inexcuseable. I missed out on several opportunities to intimidate people...

When attempting to liqidate upgrades, after every one it kicks you back to the top of the list. Normal inventory items don't do this. It makes clearing up inventory space very tedious, since the least desireable mods are always at the bottom. The elevator in the Normandy is particulary tedious, the rest are tolerable...except all the running around in the Rift Station...that was bunk. I also find the Renegade/Paragon mechanic was weak and simplistic...I tend to role play my characters, so always doing the right/wrong thing doesn't work for me. For instance, my first/current playthrough, my character resents authority and will go out of his way to antagonize them, but is much more sympathetic to "real people". Seems kind of counterproductive to allow the game to dictate my responses...thats the next great leap in RPGs...a game that responds to your choices, without dictating them, however indirectly.

Anyway Mass Effect couold be better, and should have been, and probably ISN'T as good as SMG...and I don't even like Mario.

Anthony 6 Dec 2007 18:23
11/13
Why would you even compare Mass Effect to Mario Galaxy. Two COMPLETELY different games! I heard Mass Effect was rough, but so was KOTOR and Jade Empire.

What the hell is a quid by the way? (sorry, I'm American)

Quid is English (and Australian) slang for One Pound Sterling. No one is exactly sure why we use it. My favourite possible derivation is from Quidhampton Mills, which used to make paper for the Bank of England to print pound notes on.

Tim
"I wouldn't be dead for quids!"
Posting of new comments is now locked for this page.