The Charts: Need For Speed Screeches Into View 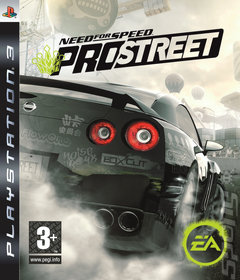 Need for Speed ProStreet powerslides into the Charts this week, but it's not enough to dislodge Assassin?s Creed from the top spot.

Despite a 32% drop in sales and only a cool critical reception, Ubisoft's stealthy sci-fi actioner consigns ProStreet to Number 2. Both the previous Need for Speed titles (Carbon and Most Wanted) entered the Chart at Number 1, claiming better launch week sales.

Activision's Call of Duty 4: Modern Warfare sees sales that are down 46% this week, the second biggest drop behind EA's Crysis (which slips 25 places to Number 39). The drop only knocks it down one place to Number 3, however. You can find out what Cliff Caswell - who writes for the British Army's Soldier Magazine - thought of it here on SPOnG.

Behind CoD4 is EA's The Simpsons Game, which also drops one place, settling at Number 4.

Dr Kawashima's Brain Training benefits from the DS's record-breaking hardware week, with the title selling more copies in a single week than it ever has before and climbing a spot to Number 5.

In spite of issues with online play, Konami's Pro Evolution Soccer 2008 is a bit of a Top 10 success story, seeing the biggest Top 10 climb - up from Number 9 to Number 6.

The only new entry to join Need for Speed ProStreet in the Top 10 is Activision's Guitar Hero III: Legends of Rock, which just makes it in at Number 10.

Other new Chart entries are Microsoft's 360 exclusive, Mass Effect, which lands at Number 12, Mario & Sonic at the Olympic Games, which has an astonishingly underwhelming start at Number 14; and Eidos' Kane & Lynch (a review of which can be found here) at Number 16.

Perhaps the most disappointing new entry, given the level of hype it's received, is Epic and Midway's Unreal Tournament 3, which makes its PC debut all the way down at Number 40.

SuperSaiyan4 27 Nov 2007 12:30
1/1
I am VERY disspointed with this NFS game it seems that every time EA make one it gets worse, Carbon was horrible for its frame rate but I liked it because of the story line and the way it played.

This game plays terribly, it feels more like a SIM rather than an arcade game and I HATE the stupid commentator what a joke I mean someone hand that moron a surf board!! And tell him to F off!

Graphically it looks very nice and the frame rates are fine but overall gameplay wise its confusing with its poorly layed out interface and gameplay just feels dismal.

I will be trading this game in but not sure what to get.

Oh and the ONLY way to get the collectors edition is to pay Ł8 for a 108kb unlock download and you get NO bonus disc like Carbon or a sleeve cover.

EA have finally made the worst NFS game to date well done to them.