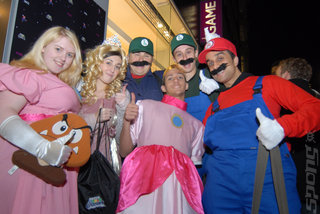 All Images (7) »
It?sa here! Super Mario Galaxy launches today and Nintendo celebrated the launch of one of SPOnG?s games of 2007 in traditional style last night, inviting lots of eager fans to gather in central London, dressed up as their favourite videogame character (see pics here and below).

Super Mario Galaxy is simply glorious. SPOnG gave it a whopping 98% score in our recent review. It?s one of the very few games that you need to be playing this winter. It?s the second reason that gamers should hunt down a Wii (nod to Twilight Princess here, even though that game was admittedly a glorified GameCube title).

Eager Nintendo fanboys and girls had been queuing up all day with more than 500 gathered by the time of the early evening launch shenanigans.

The first gamer in the queue told ITN news last night: "It's so beautiful and really pushing the Wii to what it can do. It shows the other competitors that gameplay is better than everything else" - yup, that sounds exactly like the kind of thing an untrained person on a queue would say.

"The launch of Super Mario Galaxy is an exciting new adventure for both Mario and Wii. The famous little Italian plumber is gaming's most iconic male character and is loved by millions of fans both young and old across the globe," Said David Yarnton, General Manager, Nintendo UK.

The mere thought of Justin Timberlake, Paris Hilton and Mario all in one place... well... it makes you shudder. Also, next time Ninty does a recognition comparison - maybe it could use some less awesomely transitory figures. How about, is Mario more recognisable than:

(Your ideas to the Forum please)

The 9000 16 Nov 2007 16:23
1/2
The expected 200 million sales figure is a wildly misunderstood stat by ITV - Nintendo issued a press release saying they hoped Super Mario Galaxy would push francise (as in every mario game ever) sales over the 200 million mark.

Jared Sol 17 Nov 2007 14:22
2/2
Ah, those events were fun. In birmingham, i managed to snag 5th place in line, and gt free domino's pizza as well! All in all, the best hlf an hour of queueing i've ever had.
Posting of new comments is now locked for this page.