Sigh of relief from SCEI 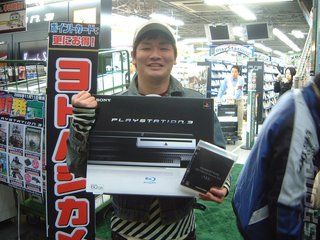 It?s been a good week for Sony, with the PS3 ?pwning? the Wii in the latest weekly Media Create Japanese sales figures out today. Seems like the newly released 40GB model PlayStation 3 was a good move after all, despite all the carping from the critics and Sony-haters (and people like us moaning about no backwards-compatibility).

The PS3 outsold Nintendo?s Wii by more than 20,000 units in Japan through the week ending November 11, with 56,000 PS3s being sold in comparison with 35,000 Wiis, and Microsoft shifted almost 6,000 Xbox 360s. The strong PS3 sales were helped along by healthy sales of Shin Sangoku Musou 5, which hit the Japanese software chart at Number 2.

The Japanese continue their love affair with handhelds though, with both the DS and the PSP sitting atop this latest hardware sales figures chart.