Eidos Steps Onto Ledge With Jumper 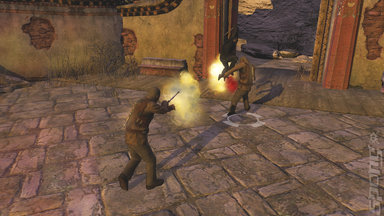 All Images (4) »
Eidos is set to publish the game of the film of the Steven Gould book Jumper, with the game heading to the Xbox 360, PS2 and Wii early next year.

A jumper, if you are curious, is someone who, through a genetic quirk, can teleport instantly to anywhere on the planet. They've been knocking around for centuries and for pretty much as long a group called the Paladins has been intent on wiping them out. The game follows Griffin, a battle-hardened Jumper out to (sharp intake of breath, please) avenge the death of his parents.

Eidos promises that the game will expand on the story of the film, which stars Hayden Christiansen and Samuel L Jackson.

For gamers, that basically means an action/combat-based game with a nifty teleportation game mechanic. Eidos promises "exotic locales", namely the Colosseum, Griffin?s desert lair, Nepal, Tokyo's streets and an "Experimental Lab Facility". Frankly, however, we just want to see how that teleportation works, because it could make for great fun.

Now let SPOnG tell you what Jumper would be like if we were developing it. Starring a middle-aged balding man (we're thinking Martin Clunes), Jumper would follow the misfortunes of a manufacturer of knitted torso garments as he attempts to end his pathetic existence by leaping from a series of high places. The Wii version would, of course, make the most of the console's motion-sensing functionality.

But, alas, SPOnG isn't developing it. You can get a taste of what you'll get on February 12th next year instead in the screens below.
Companies: Eidos
Games: Jumper