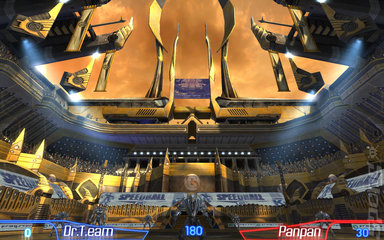 All Images (7) »
SPOnG?s Andy has been reliving his very own glory days of gaming over the last few weeks, replaying the Bitmap Bros. classic Speedball 2 on Xbox LIVE Arcade.

If you haven?t yet got involved then we can only imagine that you are not a 360 LIVE-enabled gamer/ Microsoft-drone (delete as applicable according to fanboy allegiance) and you may well be getting a little bit more excited about the impending PC release of Frogster Interactive?s Speedball 2 ? Tournament (pictured here), which Valve has just informed us will be available to download via Steam later this very month.

Speedball 2 - Tournament will use Steam?s authentication system so that Frogster is able to manage the global distribution the title.

A boxed, retail version of Speedball 2 - Tournament will be released to the German market around the same time, though everyone else will have to wait till the first quarter of 2008 to get hold of that.

However, if you are a PC gamer and you are NOT registered and using Steam then there really is only one question. Why not?