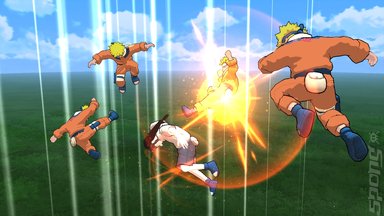 Too many Narutos spoils the air traffic lanes.
All Images (4) »
SPOnG doesn't mind admitting suffering from Naruto fatigue. It seems like every time we open a release schedule, another publisher has another game coming out featuring orange jump-suited ninja craziness. That makes it no mean feat, then, that Ubisoft had the chaps of SPOnG (jaded, damaged and bitter chaps for the most part) jumping about the room like Teletubbies on speed when it released the E3 trailer for Naruto: Rise of a Ninja.

This latest blast of bright colour, fast running and many, many Narutos falling from the sky does nothing to lessen our enthusiasm. In fact, certain SPOnG staffers haven't been told about it and have been denied Internet access for the rest of the day. Grown men playing ninja with plastic cutlery gets a bit tiresome, after all.

When you're done having having your eyes pleasured, mosey over to SPOnG's dedicated game page for more.