And only two years late... 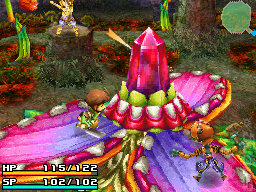 All Images (10) »
There's good news for European Final Fantasy fans this morning, with Square Enix having confirmed that the Nintendo DS's Final Fantasy Crystal Chronicles: Ring of Fates is bound for PAL territories in Spring next year.

The game has actually been knocking around for a while now, with it having originally seen release in Japan back in 2005 and a release list unveiled way back in 2004 telling us we'd be getting the game too.

The president and CEO of Square Enix Ltd., John Yamamoto offered: ?With a strong focus on action and exploration Final Fantasy Crystal Chronicles: Ring of Fates offers an exciting, fast-paced adventure. If you?ve never played a Final Fantasy game before, Ring of Fates is the perfect introduction and offers even more fun when played with friends.?

Ring of Fates, if you haven't come across it before, has been designed with accessibility in mind. It features action-based gameplay with a dash of puzzle solving. The game also offers four-way multiplayer co-op using wireless, along with a big old dollop of customisation options for your character.

You can find out more over on SPOnG's dedicated game page.