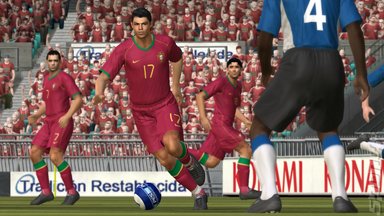 Footy just won't leave the top of the Charts at the moment. For the fourth week running we have a beautiful game-related Number 1. This time, it's Konami's Pro Evolution Soccer 2008, which debuts at the top in exactly the same week as its predecessor, PES 6, last year. The sales figures are damn close, too, with PES 6 having sold ever-so-slightly more.

What is a bit different is the breakdown between platforms. Last year PES 6 debuted on the PC, 360 and PS2, with the PS2 landing a 73% share of the sales in its first week. This year, the PS3 has been thrown into the mix, although it's the 360 that's challenging the PS2 as favourite PES console. The PS2 is still in the lead, but with a much smaller share of 42% and the 360 not too far behind with 30% of the sales.

It's a footballing hat trick at the top. EA comes in second for a second week with FIFA 08, having enjoyed a couple of weeks at the top before that. SEGA's Football Manager 2008, which grabbed the top spot last week, is down to Number 3.

Nintendo?s The Legend of Zelda: Phantom Hourglass for the DS holds steady at Number 4 in its second week, while THQ's movie tie-in, Ratatouille, climbs once again ? this time from Number 7 to Number 5.

On the shoot-'em-up front, Valve's The Orange Box drops three places to Number 6, while Nintendo debuts at Number 7 with Metroid Prime 3: Corruption (a review of which can be found here). Halo 3, meanwhile, is down once again, with the trilogy finale sitting at Number 8.

Disney has the highest climber, with High School Musical: Makin? The Cut! For the DS up nine places to Number 9.