Plus Dic And Dom, The Hooziers and more 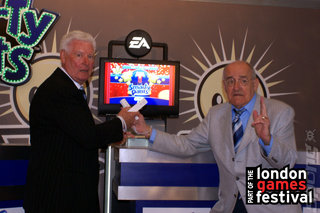 All Images (4) »
The centrepiece of this week?s London Games Festival is without a doubt EA?s PR shenanigans in central London with the US mega-publisher taking over Trafalgar Square.

EA is bombarding the famous square, looked down on by Admiral Nelson atop his sturdy column, with a blitz of celebrities, pop stars and ex-quiz show hosts such as the legendary Jim Bowen from Bullseye (pictured).

SPOnG caught up with Keith Ramsdale, EA?s VP and country general manager for the UK and Ireland, who told us it was the biggest PR event the publisher has ever staged in the UK.

In the meantime, Ramsdale will no doubt be pleased to see that the crowds turned out today, even in the pouring rain, to see what was happening on the massive stage ? acts and performances include kids? faves Dic and Dom (from ?da Bungalow?) and popsters The Hooziers (both pictured below).

Gamers and journalists alike have been taking on developers from EA?s studios in ?Beat The Makers? challenges on a number of EA?s big Xmas 2007 titles.

You can read the full interview with EA?s UK boss tomorrow here on SPOnG.

There i got in first

tyrion 26 Oct 2007 07:09
2/2
haritori wrote:
Super smashing lovely,
Let's see what you could have won.
Posting of new comments is now locked for this page.