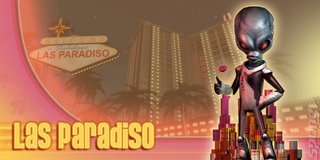 Crypto ain't happy.
In a call in which THQ's CEO, Brian Farrell, had to explain lower than expected second quarter earnings, he has blamed Epic's Unreal Engine for delays of two of its PS3 titles.

Destroy all Humans!: Path of the Furon for the 360 and PS3 and the PS3 version of Frontlines: Fuel of War have both been pushed out of the fourth quarter of THQ's fiscal year, which ends on March 31st. Speaking in a conference call, Farrell blamed trouble using the Unreal Engine on the PS3. "Like many of our competitors, we've had challenges with PS3 cross-platform development on the Unreal Engine", he said.

As Farrell says, THQ is not the only developer facing problems with the engine. Digital Extremes, which is working on darkSector, has reported similar problems, while Silicon Knights is even going as far as court over problems it has had with the technology.

Altogether, it's not shaping up to be a great week for THQ. The Wii version of de Blob has also been pushed back into next fiscal year, while the company has had to lower its fiscal forecasts thanks to a poor performance from two of its key franchises.

Thanks to lower than expected sales of Paradigm Entertainment's Stuntman: Ignition and Juice Games' Juiced 2: Hot Import Nights the company now expects net profits of $229 million (Ł111.77 million) in the second fiscal quarter instead of the $240 million (Ł117 million) it was previously forecasting.

"We are disappointed that our latest editions of Juiced and Stuntman did not perform to expectations", said Farrell.

"While we have shipped more than 1 million units worldwide on each of these titles, this is significantly below our internal forecast", Farrell added. "In both cases we did not receive our required game play mechanic and overall product quality targets. Quality matters and we missed the mark."

Farrell has said that both franchises are "currently under review", while undisclosed personnel and structural changes are to be made to the company to address the situation.