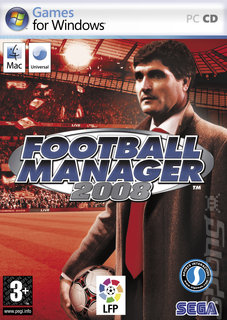 Well, England might be about to embarrass us horrendously and not make it into the Euro 2008, but football fans are a resilient lot, with enough of them buying SEGA's Football Manager 2008 to put it on the top spot in the Charts.

At least it's not egg-chasing...

Football Manager marks SEGA's first All Formats Number 1 since this week last year, when Football Manager 2007 grabbed the Number 1 spot. In fact, the Football Manager series is nothing if not consistent. The sales of this iteration are damned close to the last two versions, with it selling 1,000 units fewer than the last one and 2,000 fewer than the year before. Developer Sports Interactive can now happily claim seven of the Top 10 spots for biggest launch weeks ever for a PC game, with the other three being claimed by World of Warcraft: The Burning Crusade, The Sims 2 and Half Life 2.

Alas, good news for SEGA means bad news for EA, with FIFA 08 slipping to Number 2. Not to worry, however, as it's made up for by The Orange Box (featuring Half Life 2: Episode 2, Team Fortress 2 and Portal) for the PC and 360 entering the Charts at Number 3. The 360 version makes up an impressive 77% of the sales, no doubt due to PC owners being able to get it via download. EA certainly won't be complaining that it outsells Halo 3 and Project Gotham Racing 4 on the 360...

In the All Formats Chart Halo 3 and PGR4 slip by two places and four places respectively, landing at Numbers 5 and 6.

Nintendo has a dash of handheld success, with The Legend of Zelda: Phantom Hourglass debuting at Number 4. Vivendi also does well out of the DS, with Crash of the Titans having a strong second week and jumping from Number 19 to Number 10.

The only other new entries this week are also on Nintendo platforms, with Disney's High School Musical: Making the Cut! For the DS launching at Number 18 and 2K Play's Carnival: Funfair Games for the Wii new at Number 25. The Wii launch of Rockstar Presents Table Tennis also gives Take Two a re-entry, with the title climbing back into the Top 40 at Number 36.