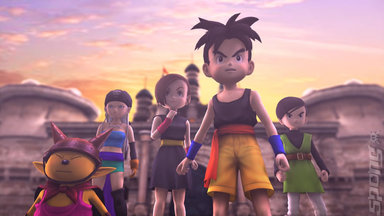 Microsoft is certainly far from giving up on cracking the tough Heartnut that is the Japan market.

In addition to rounding up some of the best home-grown development talent to produce such RPG gems for the 360 as Blue Dragon (pictured), the company has also just announced that it is to slash the cost of the hardware in Japan... again.

Microsoft is to cut the cost of the Xbox 360 by 13% in Japan its ongoing battle to catch up with Japanese rivals Nintendo and Sony.

Now all Microsoft needs to do is to assist Japanese gamers in finding a bigger aparment to store their big beige (or, if they have an Elite, black) box in.

SuperSaiyan4 22 Oct 2007 11:44
1/4
Thats far too cheap and its getting ridiculous, Microsoft don't need to cut prices the thing is Japan for some reason only prefer Nintendo and Sony - 2 Japanese companies.

If you look at the games available on the Xbox 360 and look at the number of Japanese games on that platform they to begin with surpass what the PS3 has to offer.
With the Wii its new style and approach to gaming has obviously attracted millions of gamers and new gamers at that.

Also to consider Japan loves technology but the argument last gen was the Xbox was just a black brick even though it had more than the PS2 in features.

The PS3 launches and is black but fair dues that its sleek and shiny and looks very nice and has tons of hardware.

But if you just compare the Xbox 360 and PS3 on what they offer for games the 360 comes out on top, the only reason the PS3 is selling more is because of the brand and mainly because its SONY.

However the good thing is the Xbox 360 is not a flop in Japan as the console does sell, secondly the 360 has exclusive Japanese games like Blue Dragon, Lost Odessy and Ninja Gaiden 2 and the rest especially exclusive JAPAN ONLY titles.

Also Eternal Sonata at present is on the 360 only and may appear on the PS3 later on same with Beautiful Katamari not sure if thats a timed exclusive but you just have to look at what the 360 has NOW and it gets all the games first.

I am still very keen on seeing say in mid 2008 what that PS3 will be able to do, but considering how far ahead the 360 is I reckon since it has the lead and easier development for games the 360 is going to really its stuff down the line.

deleted 22 Oct 2007 13:45
2/4
reducing the price is something they obviously see as needed as its not selling, but as us westerners see the 360 as a great console to us it may well look like a price cut too far and its losing its value, but if its not selling with great software avaiable then i suppose this is what they have to do?
more comments below our sponsor's message

Aya Ueto 23 Oct 2007 12:04
3/4
SuperSaiyan4 said "If you look at the games available on the Xbox 360 and look at the number of Japanese games on that platform they to begin with surpass what the PS3 has to offer."

No they dont. Here are the PS3's exclusives. You will notice 2 things in this list. Firstly that the PS3 actually has a hell of a lot more exclusievs released or announced than the 360 does and secondly that it has far more games for the Japanese market including little unkown titles like Final Fantasy, Metal Gear and Gran Turismo.

PreciousRoi 24 Oct 2007 02:08
4/4
Way to pad the list there. I can already see one questionable listing there, I'm sure theres more.
Posting of new comments is now locked for this page.