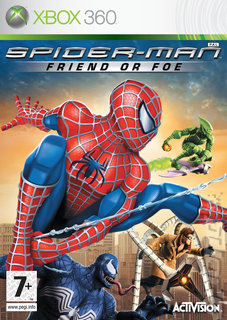 Activision has thrown its weight behind 'Bullying UK' with the release of Spider-Man: Friend or Foe. Before you panic: no, Spider-Man hasn't turned evil. Bullying UK is against bullying. The campaign will see a competition launched on bullying.co.uk in which kids aged seven and older can win copies of Friend or Foe.

Bullying UK, originally called Bullying Online (which could possibly have been since as a suggestion), is a charity set up by Harrogate-based mother and son, Liz and John Carrnell in 1999. Activision is already a sponsor of the charity.

SPOnG's reminded of a Spidey issue following the disaster that was the Maximum Carnage storyline, in which the webbed wonder was relieved to leave behind the brutality of battling a group of super-powered serial killers to help a youngster who'd had his lunchbox nicked and... Sorry. Nerd-out over...

The competition is live now, and will run until the end of Anti Bullying Week, which starts on 19th November.

?Bullying UK is proud to be working alongside Activision, a world-renowned entertainment publisher, to highlight Spider-Man: Friend or Foe and our campaign?, said John Carnell, Bullying UK. ?Partnerships like this allow us to reach out to more young people and draw them into a world where bullying is unacceptable and with an iconic character like Spider-Man the message couldn?t be clearer.?

deleted 22 Oct 2007 21:54
1/1
SPOnG wrote:
Bullying UK, originally called Bullying Online (which could possibly have been since as a suggestion),


Yes and imagine my disapointment when i logged in for some fight club style fun...