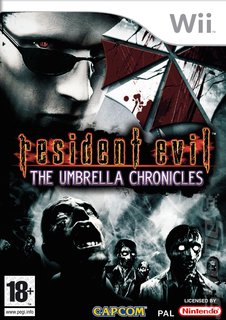 UPDATE/CORRECTION: SPOnG has contacted Nintendo and Capcom today to clarify this news. There is no official UK release date on the Wii Zapper as yet, though we are informed it will be sometime this year. Nintendo plans to bundle the Wii Zapper with Links Crossbow Training, which will carry a PEGI 12+ rating. PEGI does not apply ratings to hardware.

Nintendo or Capcom currently have no specific plans for Resident Evil/ Zapper bundles. These will be at the discretion of individual retailers

Playing cowboys and native American indigenous peoples (Injuns - to the unreconstructed) with plastic pretend guns was about the best fun you could have as a six-year old growing up in the wilds of South Yorkshire, SPOnG fondly remembers (perhaps with slightly rose-tinted specs).

Alas, with the modern fear and moral panic over everything and anything to do with guns, it seems that children will not be allowed to play with Nintendo’s new Wii Zapper, which is to be slapped with a PEGI 18-rating when it comes out next month.

Perhaps the ban makes a little more sense when you realise that one of the main Wii games to make full use of the gun is the genuinely shit-scary, on-rails survival shooter Resident Evil: The Umbrella Chronicles which Capcom has announced will be hitting shelves on November 30.

Umbrella Chronicles played using the Wii Zapper lets you play as Chris, Jill, Rebecca, Billy and Carlos in single player or two-player co-op modes. It was one of our surprise favourites from E3 back in the summer so we look forward to playing the full game next month. After the kids have gone to bed.

Perhaps it's totally bloody bonkers and shows a huge double-standard. Why? Let's have a look at the entry requirements for joining the British Army and being sent to fight with real guns. Your basic soldier can join at 16 years old. Officers have to be 17.

Yup, you can blow the hell out of other real life people with real life guns but you can't play with a Wii Zapper... makes you want to laugh with crying doesn't it?

I can understand RE:UC getting that rating, but the peripheral getting it is weird.

Daz 19 Oct 2007 13:32
3/18
It's shaped a bit like a firearm.
As such it could have fallen under the RIF (replica imitation firearm) definition in the Violent Crime Reduction bill and been banned from manufacture, sale and import entirely (as any toy guns which aren't transparent or brightly coloured have been since October 1st).
Such is the country we live in.

I hope not, but that's the suggestion the article gives.

Please say it isn't so. I'm not usually one to gripe overly about certification (I'm mostly in favour of it), but this is quite clearly madness.

deleted 19 Oct 2007 13:53
5/18
at least it isnt banned! and they believe that a sensible adult can tell the differences between a piece of white plastic and a metal death machine, although you would of `thunk` otherwise!

Tim Smith 19 Oct 2007 13:55
6/18
Daz wrote:
It's shaped a bit like a firearm.
As such it could have fallen under the RIF (replica imitation firearm) definition in the Violent Crime Reduction bill and been banned from manufacture, sale and import entirely (as any toy guns which aren't transparent or brightly coloured have been since October 1st).

I used to use gun-shaped twigs or sticks when I was growing up... maybe we should ban trees.

(We were too poor to afford plastic, even my plastic mac was made out of compressed grass)

deleted 19 Oct 2007 14:04
7/18
Tim Smith wrote:
Daz wrote:
It's shaped a bit like a firearm.
As such it could have fallen under the RIF (replica imitation firearm) definition in the Violent Crime Reduction bill and been banned from manufacture, sale and import entirely (as any toy guns which aren't transparent or brightly coloured have been since October 1st).

I used to use gun-shaped twigs or sticks when I was growing up... maybe we should trees.

(We were too poor to afford plastic, even my plastic mac was made out of compressed grass)


anyone ever remember throwing sticks in the air as a kid and instead of runing out of harms way, just crouching with arms over your head, like that would stop the pain when it innevitably hit you...

but that just might be me my mum did say i was special?? eee i remember what it was like to play before my spectrum xmas morning..

does this mean Links Crossbow Training will be the first PEGI 18-rated Zelda game? Maybe that's why they dropped the LoZ prefix??? Curious.

what a farce this is. the next g-con should be outright banned if the zapper is worth an 18

I remember playing with the light gun which came with the nes when i was a small nipper..

18 rating? Most insane f**k-witted-knee-jerk-reaction to daily mail reading scum that i've ever heard!

ajmetz 19 Oct 2007 17:47
11/18
Doesn't it look more like a shelf bracket than a gun?
It's not even a complete product until you put the controller you've already got in it.
And that controller's called a nun-chunk don't you know...

Basch 19 Oct 2007 21:49
12/18
The next thing on PEGI's agenda will be to re-classsify Wii Sports as an 18+ for the simulation of blunt bludgeoning instruments such as baseball bats and... er, tennis rackets.

It strikes me as rather odd that PEGI gave a useless, vaguely gun-shaped shell an 18+ but not the Wii remote itself: because most Wii games demand it, people held it like a gun anyway. Why not give said controller a poorly judged age rating as well for catalysing the role of Wii Zapper?

This whole situation speaks volumes about the integrity of game classification boards, and about the tenuous reasoning behind its ratings (in this instance, its affiliation with Resident Evil – which doesn't even <i>need</i> the Wii Zapper). And how come you can still buy other better, more realistic lightguns without having to worry about its rating?

I have an awful feeling that this piece was written by one of our non-Yorkshire writers who does not realise this fact, nor the offence the misattribution might cause.

What the f**k is the world coming to?

How many retards are out there making these decisions?

One of our number was, of course, born and brought up in Doncaster...

I can understand RE:UC getting that rating, but the peripheral getting it is weird.

Well I don't understand exactly what is getting the rating. My understanding is that you buy the Zapper as a stand alone peripheral that comes with a free game, Crossbow Training. RE:UC is a stand alone (18 rated) game that will work with or without the Zapper. It won't come bundled.

If that is the case, then it's the Zapper peripheral that's getting the 18 rating (could be because it's getting bundled with Link's Crossbow Training, they really don't like crossbows in this country either) and if that's the case then I wouldn't be surprised if Nintendo choose not to release it in the UK at all. That is something I think we should be worried about.