A man in a pub told us 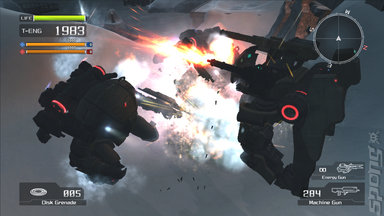 All Images (5) »
As news seeps out of this week's Capcom Gamers Day, held (at least for part of the evening) in a pub in West London, it's been confirmed that Capcom's hit PC and 360 shooter Lost Planet will also be released on Sony's PlayStation 3.

Strangely enough, SPOnG was at the same pub following a preview event of Ubisoft's movie-tie-in Beowulf (preview and more on that one next week), when we bumped into a bunch of chaps from Capcom and heard this news, as well as the earlier news that Street Fighter 4 has finally been officially announced.

So, we can finally authoritatively report that a man that we met in a pub told us some genuinely exciting and proper videogame news.

Lost Planet will be available early next year and will include all bonus characters from the PC version and extra downloadable content from the 360 version, making it the complete game. It will also have 16 player gaming online over the PSN.

This of course follows the recent Capcom news that Monster Hunter 3 ('big in Japan') is set to make the leap over to being a Nintendo Wii exclusive next year.
Companies: Capcom
Games: Lost Planet: Extreme Condition

I guess its cost effective for Capcom to do this now, after great 360 and PC sales. Good move, Capcom.

Second, I'd like to propose a law where anyone using the idiot term "lol" should be strung up, preferably by some tender parts. It doesn't say "hey folks, check me out, I am so cheerful, I am LAUGHING OUT LOUD!", but rather "I am a smug git".
Also, I have recently found out that lots of girls, and lots of people who do not speak English as their first language, and particularly girls who do not speak English as a first language, have assumed that it means "Lots Of Love". I wondered why they were all laughing at me in text messages, and it was only when I confronted them that they told me what they mistakenly assumed it meant. It's possible I have even missed out on a definite shag due to this confusion. See the problems this retard-speak causes? Do you? Stop it, people of the Internet... I beg you!