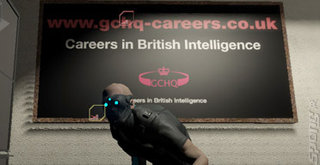 Ever fancied carving our a career as a government spy? Not just any government, but the same one that employs James Pond, Harry Palmer and Alec Leamas? Yes, the British Government!

A new advertising campaign focused on a number of popular online games is set to help our spy-masters at MI5 and MI6 reach 'an internet-savvy generation of graduates' ? the first time such a campaign has been run in the online gaming sphere.

If you fancy yourself as the next real-life Zafar Younis, and if you are a fan of Electronic Arts' Need for Speed Carbon, Ubisoft's Tom Clancy's Rainbow Six: Vegas, Splinter Cell Double Agent, or Activision's Enemy Territory: Quake Wars then you may well soon be seeing these government ads (pictured here) tempting you to work for GCHQ (Government Communications Headquarters - the centre for Her Majesty's Government's Signal Intelligence (SIGINT) activities).

GCHQ's recruitment campaign is running via the Microsoft-owned, in-game advertising firm Massive's network of games, with the tag-line "Careers in British Intelligence"... no comment really.

"Although press advertising still plays an important role it's now just one element of an integrated approach to recruitment that forward-thinking clients like GCHQ are spearheading," said Kate Clemens, the head of GCHQ's digital strategy at recruitment and communications specialist TMP Worldwide.