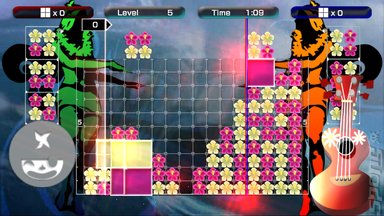 All Images (2) »
Today is far and away the greatest day in the long and glorious history of Microsoft?s Xbox Live Arcade service. October 17th sees the launch of what SPOnG hopes will become our LIVE Arcade game of 2007: the Bitmap Brothers? awe-inspiring Speedball 2 and ? if that was not enough ? some new content for our current favourite XBLA title, Lumines Live!

Speaking about the high-def resurrection of Speedball 2,
Ian Higgins, CEO Empire Interactive said, ?Xbox LIVE Arcade is the ideal environment for this exciting new high definition version of Speedball. With the addition of extra content packs and downloadable content, gamers will at last have the ultimate version of the game.?

You can read original Bitmap Brother, Mike Montgomery's thoughts on the game in the SPOnG interview, right here.

Meanwhile, Andy SPOnG had the following pithy statement to make regarding the game, "This morning's been like being in 1991 but with a better telly. I've spent 20 minutes playing it already; more than all of us put together played the PES 2008 demo, and we've had that for two weeks already."

If that action is too much for you, Tetsuya Mizuguchi?s Q Entertainment also treats us with some free skins and the newly released Rockin' Holiday Pack at a cost of 400 Microsoft Points (Ł3.40) for the wonder puzzler that is Lumines Live!

Additionally, you can now buy the basic version of Miz?s puzzler for a mere 800 Microsoft Points (around Ł6.80, down from its previous price of 1200 MS Points), with the Heavenly Star and Breeze skins also free to Gold members till mid November. No real excuse to not buy this any more, as it is perhaps the best value-for-money game you will ever invest in.

Give us Streets of rage 1, Sonic 2 with ACTUAL ONLINE CO-OP! And a proper street fighter game!

There are soo many crapp games on the arcade market place its unbelievable and most of them way too much points to buy!

Think I will stick with HALO 3 and PGR4.

Best arcade game of all time on the 360 is UNO that is a FACT.

Mister 4, you are an oaf. Speedball is a legendary game and you look like a goth

Also mate whats wrong with goths? And that pick is of Amy Lee your runt.