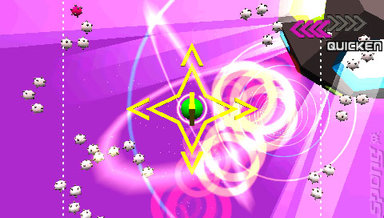 This latest addition to the Every Extend series feature 100 (yes, count 'em, 100!) times as many enemies and chain reactions as its predecessor. Is that overkill? SPOnG suggests you pay 800 Microsoft points and find out. If you haven't had chance to dabble in the trippy series before, head over to SPOnG's game page for the PSP original to find out what it's all about.

Meanwhile, Speedball 2 offers an update on the fondly remembered (by people old enough to remember plaid in its grunge incarnation) Bitmap Brothers classic. It's like today's sports if today's sports involved hurling shiny chunks of metal at each other. Read all about it here.

If all that wasn't enough, Microsoft's dishing up new content for Lumines Live, including ?Heavenly Star? and ?Breeze? skins (which are free to all Gold subscribers) and the ?Rockin? Holiday Pack? (400 Microsoft points, for those who really must line the company's coffers). As an added bonus, those who don't already have the game can grab it for a discounted price of 800 points from now on.

It'll all be available as of 9am GMT on Wednesday.
Games: Every Extend Extra Speedball 2