The Charts: Halo 3 Sent Off By FIFA 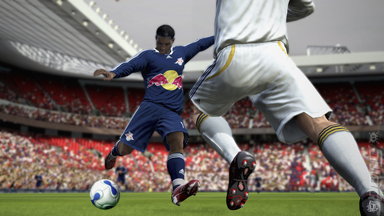 This is what Master Chief looks like without the armour. Promise.
Halo 3 has failed to follow up on last week's storming sales success, having been dislodged from the top of the Charts by FIFA 08.

Bungie's star shooter drops a whopping 79% in sales. SPOnG suspects that the one in three Xbox 360 owners who bought Halo 3 in its first week of release made up a large number of the gamers who are actually bothered.

So, the good news this week is for Electronic Arts. This marks the third year running that FIFA 08 has topped the All Formats Chart in week 40. The game has grabbed the Number 1 spot in the PS2, PS3, PSP and Wii Charts. The PS2 version has also overtaken Halo 3 in this week's Individual Formats Chart, selling the most copies on a single game on one platform.

THQ has also had an excellent week in the Charts. Juiced 2: Hot Import Nights is the Top 10's only game to increase in sales with a jump of 16%. The racer climbs two spots from Number 5 to Number 3. Not only that, but THQ's film tie-in, Ratatouille, jumps a massive 31 places up to Number 8 thanks to the film's release.

EA still dominates the Top 10, however. MySims and Tiger Woods PGA Tour 08 both lose a bit of ground, but only a bit, with the games both slipping a place to Numbers 4 and 5 respectively.

First timers in the Charts this include Ubisoft's CSI: Hard Evidence, which debuts for the PC and 360 at Number 24. Two THQ games also debut, making an appearance in their second week of release, these are: Conan for the 360 and PS3 slashing in at Number 32 and Company of Heroes: Opposing Fronts on the PC landing at Number 34.

Next week, watch out for Sony's Folklore on the PS3, Naruto Ninja Council on the DS from Nintendo, Spider-Man: Friend or Foe from Activision on just about everything and a little racer called Project Gotham 4 from Microsoft on the 360.
Companies: Bungie Electronic Arts Microsoft THQ Ubisoft
Games: FIFA 08 Halo 3 MySims Ratatouille Tiger Woods PGA Tour 08

deleted 9 Oct 2007 10:13
1/1
Anyone seen the TV advert for PGR4, is ti just me or have they just copied the PGR3 Ad and added Motorcycles?
Posting of new comments is now locked for this page.