Conan Gets Barbaric On XB Live - Demo Up Now 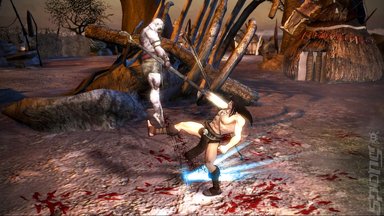 All Images (6) »
THQ has just popped a demo of its new hack'n'slash Conan onto Xbox Live, with a PlayStation Network version to follow later this week on October 11.

"In the Conan playable demo the famed barbarian finds himself stranded in the Barachan Isles, a haven for pirates and thieves. A terrible plague known as the Black Death has spread across the land, and Conan must escape before it consumes him as well", according to the publisher.

Luckily, for Conan at least, he ?crosses paths with the beautiful and fearless warrior queen, A'Kanna, whose ship can provide safe passage from the cursed islands. However, Conan must first save the ship's crew, which has been enslaved by the local cut-throats."

Download the 483MB demo of Conan now for a taster of Conan?s 100+ fighting moves. Or don?t. It is entirely your choice. If you have an Xbox 360 that is.

If you have a PS3 you will have to wait a little longer... (insert pithy, acid comment here, or in the Forum).

Joji 8 Oct 2007 17:15
2/3
Well I've sampled the demo and its actually pretty good. I nice hack n slash with a very God of War like feel. Think I'll put this on my list. Only just under 500mb surprisingly, but still good. Check it out. Could be a sleeper hit.

Not a bad thing to explore the Conan universe either, so there's plenty to draw on for this game. I never read any of the books or comics so I'm game.

SuperSaiyan4 9 Oct 2007 07:59
3/3
I also checked out the demo yesterday and to be honest I was rather impressed at the fighting also reminded me for God Of War also this game felt a lot better than Heavenly Sword as well - HS was more like a butterfly in your face it didn't have that solid feeling to it.

The only problems are well the visuals, nothing overly amazing a bit cheap and the voice acting for Conan is terrible he just doesn't sound like a Barbarian - would have suited Arnie's voice to be honest.