US Churches Use Halo To Lure Impressionable Young Minds 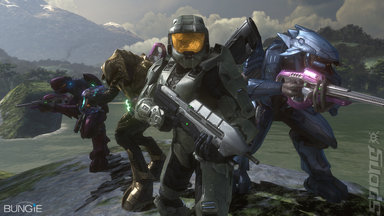 Is it possible that the name 'Halo' has confused the church?

?Across the country, hundreds of ministers and pastors desperate to reach young congregants have drawn concern and criticism through their use of an unusual recruiting tool: the immersive and violent video game Halo?? reports the NY Times.

The report continues: ?Those buying it must be 17 years old, given it is rated M for mature audiences. But that has not prevented leaders at churches and youth centers across Protestant denominations, including evangelical churches that have cautioned against violent entertainment, from holding heavily attended Halo nights and stocking their centers with multiple game consoles so dozens of teenagers can flock around big-screen televisions and shoot it out. ?

?If you want to connect with young teenage boys and drag them into church, free alcohol and pornographic movies would do it,? said James Tonkowich, president of the Institute on Religion and Democracy, a nonprofit group that assesses denominational policies. ?My own take is you can do better than that.?

Daniel R. Heimbach, a professor of Christian ethics at Southeastern Baptist Theological Seminary, added: ?To justify whatever killing is involved by saying that it?s just pixels involved is an illusion.?

However, according to Kedrick Kenerly, founder of Christian Gamers Online, playing Halo is ?no different than going on a camping trip?It?s a way to fellowship.?

SPOnG warning: If anybody claiming to represent God approaches you and offers you free videogames, ignore them or report them to your nearest police station.

SuperSaiyan4 8 Oct 2007 10:54
1/9
With the amount of insanely strange things that ONLY seem to happen in the USA why am I not surprised by this? I did however laugh...

If you put video games into a Church with a setup of televisions etc of course they will come...But they wont be coming for worship of God...No...They will be coming to worship the Xbox 360 and the game HALO 3...

I think the prayers will be something like this:

No one has ever said it wasn't doing well in the United States.

Joji 8 Oct 2007 12:20
4/9
What hypocrisy? Churches can use games to get kids into their flock, but games developers can't use a church in our games. Lol....ridiculous.

Next the pedos will be doing the same, very worrying.

So... hang on, they're saying that you're actually killing people when you play Halo? Damn, I just didn't know. What about if I was to think about someone getting killed in my mind? That's probably just as bad. Maybe WORSE.

I certainly hope nobody ever thinks about Jesus hung up on the cross, bleeding out. To think about something like that would be tantamount to MURDER.

duque 8 Oct 2007 14:13
6/9
The Church has the right to do that, I think catholic church has good points, they are trying to help young people to become better persons, is there something wrong with that? Of course there will be some pedophilic priest enjoing the game, but, thats the point that we should request the church to be more carefull with.
It seems like values are not imortant anymore, like enjoing a games come first, no matter what consecuense it has on our young people. What a selfish mentality. I think we should find the equilibrium.

The church is teaching that Christianity can be applied in all sorts of circumstances, why then separate gaming from religion. Halo is a good choice, not only for its biblical references (halo, covenant, ect. Did you think that was a coincidence?) but also because it teaches people how to behave in online areas. This allows the teaching of good sportsmanship, anger management and evangelism an areas where people will find themselves in the real world and can reach out to lots of others. Oh yeah, and its also a lot of fun and, if you hadn't noticed, the modern church is actually really big on fun.

I once went to a Christian (Brainwashing) fundraising event (didnt want to go honest) and they had PS2`s and Xbox`s available for 50p a play the games were Tekken and Burnout 2, needless to say they didnt raise much as the kids wernt there it was full of older people who had been told they would burn in a firey hell for doing anything other than breathing as a child and still had that fear instilled in them.

My question to the religious types out there is this,

God created Adam, and then took one of Adams ribs and created from that Eve,
Adam & Eve Did have Cain & Able, Cain Begat Able, Cain Was Banished

Q. Who did Cain Have Children With?

Now it was either, His Mother, His Sisters, Or No one and if its no one how did Humanity continue?, if Adam and Eve had more sons who did they have kids with?, and if that was with their mother or sisters why is it incest is a Sin, and if God made exceptions for that occaision whats to say God wont make exceptions for me having a Wank now and again?

PreciousRoi 9 Oct 2007 06:39
9/9
Its ok man, the stupid bastards don't realize that Halo has an underlying anti-religious message on several levels. Mebbe some of them will be inspired to question their own Prophet of Truth.

haritori, theres actually non-canonical books which deal with that question...
Posting of new comments is now locked for this page.