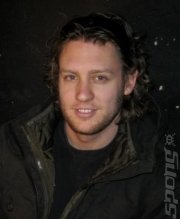 Director, Neill Blomkamp
In a recent interview with Halo movie director, Neill Blomkamp (pictured here), the celebrated advertising and short-movie wizard reveals more details about the background to the project, the three mindblowing short teasers he has made to date and why the movie is still lost somewhere west of development hell.

Firstly, what about those three short movies we?ve seen so far. Where do they fit? Blomkamp reveals:

?This is the first I've really spoken about those pieces. There's such a massive misconception about what those are. In essence, those pieces have zero to do with the film. Like less than zero. I worked on the film for a few months and we developed a lot of things during that time, and none of that has anything to do with the shorts. Long, long long after the film died, Bungie and Microsoft asked me if I wanted to be involved in the Halo 3 promotional stuff, just because I knew all of the guys at Bungie, and I was like 'Yeah, sure, that sounds like fun'.?

?I went about starting to make those three pieces back with a lot of the guys from Weta who had made the original film. All of the design and everything that we'd made for the film is just locked up in some locker somewhere, so all of the stuff for the shorts is specifically for the short films, from scratch. It's basically, I guess, viral advertising for Halo 3, it's one of the many different promotional pieces you find out there.?

Right, so that?s misconception number one cleared up then. The shorts are nothing to do with the (currently shelved) feature length movie, which according to Blomkamp is entirely dead "in the configuration it was in? there was not even one percent of my mind in doing those short pieces to try and resurrect the film."

Blomkamp goes on to talk more about his own signature style of mixing up feeds from different sources, noting in particular an ?interest in degraded, screwed-up looking footage as opposed to beautiful, well set up picturesque imagery? ? which is clear from watching the three short promo movies.

He adds, ?Once you resign yourself to being OK with lo-fi, degraded images, then you can start to pull imagery from a lot of different places. Like that overhead infra-red photography, that idea just came from looking at military footage?You have to be OK with saying "Yeah, it's going to look like shit, but it's going to feel a little bit more real."

But what about the Halo movie? Why has it been effectively shelved?

According to the director ?the studios kind of threw a noose around me?I wanted it to feel like the most brutal, real version of science fiction in a war environment that you've seen in a while. And Universal was on board with that. I don't really remember what Fox thought about it, but Universal seemed down with it. It would have been cool, it would have been a unique take on things, science fiction in a dirty, organic way....I'm not interested in the way science fiction is being portrayed, definitely over the last ten years. For me it's more like reality, a lot of the stuff comes from imagery, even just coming out of Iraq. That's, to some extent, the most technologically advanced war that's been fought so far, if you can call it a war....I guess that's my inspiration right now. I don't really want to call war inspiration, that's really fucked up, but you know what I mean."

While Blomkamp remains quiet about his current project, when asked if he holds out for reconciliation with the studios in getting the Halo movie back he teasingly answers:

?As I'm getting older one of the things I've realized most about this industry is never say never. That's the first thing. Right now, I can't see myself doing that film. But I'm not going to say that I'm not going to do it. So in the present moment, right now, I could take it or leave it. It doesn't matter to me anymore. There's too much interesting shit out there. The film has the capacity, if things line up correctly, to be, I think, really cool. But it ended up collapsing, and things happen for a reason.?

You heard it here ? never say never? Let?s hope that the studios figure out their differences and financial wranglings on the Halo movie project pretty soon, and figure them out in such a way to get Blomkamp back on board.

SuperSaiyan4 5 Oct 2007 10:11
1/3
What I dont understand HALO has more potential at being made into a huge hit movie than say Gears of war - now thats IMO.

However GoW doesn't seem to have suffered any setbacks so why HALO?

RiseFromYourGrave 5 Oct 2007 17:38
2/3
although it doesnt actually say precisely in that piece, it seems someone high up, maybe at Fox, had a problem with his angle on the halo franchise. he wants to make an adult, gritty, real war drama and they probably want a PG Blockbuster with Matt LeBlanc as Master Chief

if gears is getting on better, there certainly arent these differences between the main players

I'm sure if the Gears movie goes down well, a Halo movie might seem more viable to the suits. I bet the Halo film will eventually be made, either way.