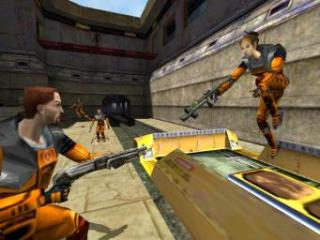 We have learnt that the Dreamcast version of the brilliant narrative-led shooter from Havas (now part of Vivendi Interactive) will go gold sooner than expected.

This will further increase the Dreamcast?s position as king of console first person shooters and will sit nicely alongside Unreal Tournament, Quake 3 and Soldier of Fortune.

?We are expecting the developers to tell us that everything is complete at their end,? a Havas spokesman told us. ?Then we just have to wait until the game is signed off by the American office and then we are ready to roll out. I have seen it running and it looks really good. There was a lot of excitement about the first and second batch of screens released, but the final build of the game has to be seen to be believed.?

The game will contain the whole of the impressive story from the PC as well as some extra bits and pieces.