This one is less laggy than the last one, apparently 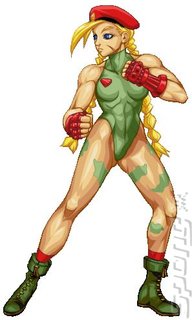 All Images (2) »
Two new bits of character art have popped up for the forthcoming XBL and PSN high definition remake of all-time-classic 2D beat-em-up Street Fighter II, and you can see them to the right and below.

Check out the new ?beautiful but deadly? British character, Cammy (right), and some nutbar called Bison (below) in ?mid-Psycho Crusher?.

Capcom?s designer informs us that ?the Bison shot is a work in progress? and that, ?you?ll notice a blur effect going on. We?re still determining on whether or not it will stay. We?re working on it, but we?re not sure how well it?s going to work with the pallet swapping tech we?re using.?

SPOnG is particularly glad to hear that the online aspect of the game is notably better than SFII Hyper Fighter for XBL Arcade ? one of the most popular downloadable XBLA titles to date - which was a little too laggy for our nimble-fingered tastes.

We have spoken with Capcom?s UK office this morning to find out an exact release date and price for what could well prove to be (next to Virtua Fighter 5) the beat-em-up phenomenon of the year.

Super Street Fighter II Turbo HD Remix should, fingers crossed, be up sometime this side of Christ?s birthday on Xbox Live and PSN.