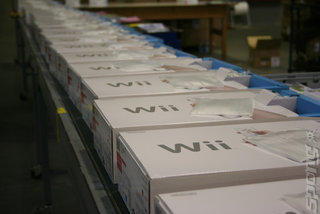 Nintendo of America president Reggie Fils-Aime has gone on record this weekend claiming that Nintendo will still not be able to produce enough Wiis to meet demand this coming Christmas holiday season.

"We're working very hard to make sure that consumers are satisfied this holiday, but I can't guarantee that we're going to meet demand. As a matter of fact, I can tell you on the record that we won't," Fils-Aime told an interviewer.

"What I can tell you is that typically, our inventory is lasting a day... I don't think we will know when supply crosses with demand until after the holiday season? The issue is not a lack of production. The issue is we went in with a curve that was aggressive, but the demand has been substantially more than that. And the ability to ramp up production and to sustain it is not a switch that you flick on," he added.

As to the much debated long-term future of the Wii platform, Fils-Aime noted: ?You know, our hardware group, literally as soon as the system's out the door, they're already thinking about what's next. That's true for any of our platforms.?

Fils-Aime also found time to have a little pop at Halo 3 and its ability to sell platforms, opining: ?Will they [Microsoft] sell a lot of software? Certainly. Will it sell hardware? I think it's an open question. Why? Because I think that the "Halo 3" consumer already has the hardware, because they're playing "BioShock" and "Crackdown" and a variety of games that are, in the end, quite similar: first-person shooter experience, multiplayer capable online. Tell me what's new??

Joji 1 Oct 2007 13:26
1/2
Why am I not surprised by this? I get the feeling Wii is gonna be in demand for years to come, the demand is either just too high or Nintendo aren't handling the deamnd well.

This is the only bug in Nintendo's fruity pie. We'll soon find out if its enough for Sony to exploit. I'm not putting much hope in it mind.

Hypnotoad 1 Oct 2007 23:42
2/2
Good one Reggie. Still can't keep up with demand 2 years in? I see. And Bioshock, Crackdown and Halo3 are all quiet similar? Woah, you just blew my mind. Whats that? It's all about last generation tech with tacked on waggle? Damn! Reggie, you're amazing.

Hilarity aside, I won't go into the fact that the Wii is the lowest scoring platform ever conceived according game rankings and that I've seen more ingenuity come out for my arse on a Sunday morning than I have on your 'Revolution' to date. Whoops, just went into the fact - oh well.

Reggie, leave the real game making to the big boys - enjoy that Hungry Hungry Hippo crowd you've managed to cut a nice slice from and shut up.