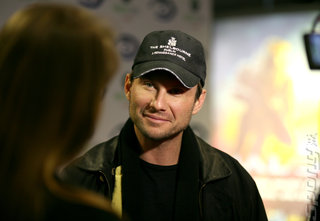 You can see to the right (and below) a good selection of pics of some of the actual 'proper' celebs - including Christian Slater (pictured), model Kimberley Stewart and the bizarrely small Pharrell Williams - who rocked up to London's IMAX cinema earlier in the evening, and rocked out at the exclusive Kingly Club much later on into the early hours.

What you (thankfully) can't see in these pictures is the horde of liggers at the after-show party. This included a rather motley crew made up of has-been reality TV contestants ('coverage in Heat secured there then'), glamour models and friends-of-friends-of-the-PR.

Strange that a party to celebrate the launch of a video game should entice London's demi-monde out to play on a cold and damp Tuesday night. Or perhaps not so strange if you consider that Microsoft has just sent us a press release to announce that Halo 3 is now officially 'the biggest entertainment launch in history', racking up over $170 million in the U.S. alone during the first day on sale, topping the previous biggest sales records for books or movie releases. Over a million players logged into Xbox live during the first 20 hours of the game being on release.

Bob McKenzie, Senior Vice President of Merchandising for GameStop Corp commented that, "With consumer demand for Halo 3 and related products, we expect it to be the biggest video game title generator in GameStop's history."

Back to the London launch, TV's Iain Lee did a more than admirable job of hosting Halo 3 battles on the massive IMAX screen and the crowd left happy, each lucky punter being given a copy of the game and a Halo 3 t-shirt on the way back out into the cold London night.

SPOnG really hopes we see more of Lee at the forthcoming BAFTA games awards later next month, as it's refreshing and genuinely funny to see a comedian of his calibre that knows as much, if not more about gaming as his audience.

Right, back to fight the final fight. Goodnight.