Better than the PlayStation version we heard! 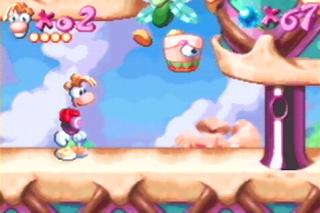 All Images (10) »
Ubi Soft has sent us ten new screens of Rayman Advance and it would be fair to say that the staff there are as excited about the game as we are.

Things started to look up for Rayman Advance when Nintendo chief, Ken Lobb said, ?There have been three distinct jumps above what I thought was possible on Game Boy Advance. A month and a half or two months ago, I saw Rayman and I was like 'wow, I didn't really expect that.' It looked like a PlayStation One game. I thought the GBA could do it -- but seeing is believing. We actually put that game side by side with the PSOne version and it looks far better on Game Boy Advance.?

The game does indeed look fantastic when running. We have seen Rayman on GBA flashcard at Ubi Soft?s offices and the level of detail, and the smoothness of animation is exemplary. The actual flash card did look a bit stupid, as it is about a foot long, but we can forgive that. We were assured that the commercial release would be squeezed into a normal Game Boy Advance cartridge.

The game will include a massive 78 levels, something that Ubi Soft is rightfully proud of.

The French development team behind Rayman Advance was eager to show off the game?s technical achievements. ?Numerous synchronised animations and a perfect fluidity enhance the proven
successful game-play of the Rayman series. Additionally, the 4 differing permanent layers all have a rate of 60 frames per second, giving a depth of field never before seen on a portable console. The essence that was instilled in this benchmark game, by its original talented creator Michel Ancel, is still evident today. His touch is completely present through the humour of the numerous characters, the vibrant graphics and the perfect balance of the gameplay design.?

Ubi Soft also confirmed that Rayman Advance will be a launch title in Europe, and will hit shelves along with the Game Boy Advance on the 22nd of June this year.