Nintendo attempts to put us to sleep 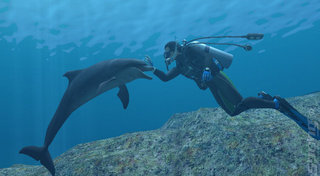 All Images (2) »
Amid all the hype surrounding the frenetic launch of Halo 3, Nintendo has taken a step to sooth us. The company has confirmed that its first-party Wii title, Endless Ocean, will be released in Europe on November 9th.

If you're not familiar with the game, it looks like the most soporific game on the face of the planet. In a nutshell, Endless Ocean puts players in the role of a diver gently making his (or, of course, her) way across the ocean floor, taking in the sights as he/she ('he' from now on, for the sake of not annoying your tits off) goes.

The game hasn't quite been kept a secret by Nintendo - it already saw release in Japan this August under the title Forever Blue and appeared on a leaked release schedule over here ? but this is the first time Tendy's had much to say on it to us Europeans.

Players use a boat as the platform for their exploration, using it to dive in with equipment such as underwater cameras and fish bait. In its cosy cabin they'll keep logs of the fish they've spotted like proper blue piscatholgists (alright, we made that word up ? sue us). By taking part in missions (taking photos and that, no underwater shooty-shooty a la BioShock stuff here... except for with your camera, which doesn't count) players can unlock content such as new gear to customise their diver with.

Telling us about the one thing that might redeem this game from earning the adjective coma-inducing, Nintendo says, ?Navigating their way through the depths using the Wii remote, players guide their character using the pointer?s cursor, visible as a bright blue dot. When players wish to interact with fish or plants they can highlight them with the pointer and press the A Button. By doing so, players discover new species and build up their fish log. What?s more you can also befriend companions like a dolphin which will become your partner and with whom you can train and swim with.?

If that doesn't sound quite relaxing enough, there's more! ?On the deck of the boat?, Nintendo tells us, ? is a deckchair that allows the player to sit and watch the sea. Alternatively in the aquarium section of the game players can select fish they have seen and add them in an aquarium for a closer inspection. What?s more this game even doubles up as a tranquil screensaver if the Wii Remote is left untouched. The relaxed setting is further heightened with a tranquil soundtrack from New Zealand songstress Hayley Westenra."

There's also an online mode on offer, with players able to take the plunge together and communicate using the D-Pad. Because you can't talk underwater.

Whew! All that text and not a single horrifyingly bad joke involving the words ?ocean?, "endless" and ?Wii?. SPOnG needs a rest...

Endless Ocean is set to retail at around Ł30.
Companies: Nintendo

tyrion 26 Sep 2007 14:36
3/3
OptimusP wrote:
I wil buy this for the dolphin interaction...i mean, they're dolphins! And the peace and quite of the game...a perfect game to just...well...think about life
If you have a PS3, try flOw - it's so chilling I almost didn't get my review written.
Posting of new comments is now locked for this page.